In 1890, a medical student named Charles Nesbitt took a tour of the Lower East Side. At one point he was invited to Walhalla Hall, an event space at 48-52 Orchard Street. Located just two blocks away from what is now the Tenement Museum, our residents would have likely been familiar with it, and maybe even attended sometimes. A true anchor in the neighborhood, Walhalla Hall served as a venue for everything from German singing societies to labor union meetings. Historian George Chauncey described this particular excursion in his book Gay New York, writing that upon entering the hall Nesbitt,

“Discovered some five hundred same-sex male and female couples in attendance, ‘waltzing sedately to the music of a good band.’ Along with the male couples there were ‘quite a few…masculine looking women in male evening dress’ dancing with other women, many of whom seem to have impressed the student as being of ‘good’ background. ‘One could quite easily imagine oneself,’ he recalled with amused incredulity, ‘in a formal evening ball room among respectable people.’”12 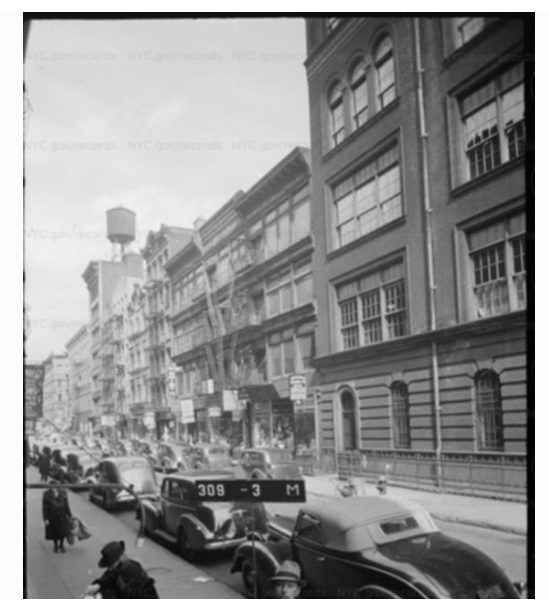 This exceptional example of LGBTQ+ placemaking on the Lower East Side speaks to a rich but oft-unspoken part of the neighborhood’s history. At the Tenement Museum, we examine how newcomers created spaces for themselves and their communities. While the lives and contributions of marginalized people go largely unacknowledged in mainstream history, there is no denying their importance in being a fundamental part of history. This is equally true when it comes to exploring LGBTQ+ narratives.

This exploration often requires reading between the lines of bias that silenced these stories. Nesbitt’s surprised note regarding the impression of “good” backgrounds, and imagining oneself among “respectable people” speaks to the lens through which the Lower East Side was viewed by outsiders.

The moral panic of the 19th into the 20th centuries was linked to a middle-class imagination of the lawlessness and immorality of the LES. Middle-class New Yorkers held contempt towards immigrants settling in the neighborhood, as well as towards ideas and practices that challenged heteronormativity, such as sex work, homosexuality, and gender nonconformance. In 1849, novelist George Thompson offered an example of these perceived threats to the native born heteronormative way of life in his book, City Crimes; Or, Life in New York and Boston:

“We are about to record a startling fact—in New York, there are boys who prostitute themselves from motives of gain; and they are liberally patronized by the tribe of genteel foreign vagabonds who infest the city.” 3

Anti-vice squads pointed to the local saloons, dance halls and theaters as centers for crime and ‘degeneracy.’

However, to hold a masquerade ball at Walhalla Hall, one needed to obtain a license from the city. That the dance Charles Nesbitt attended in 1890 even took place speaks to the network of support that existed in the neighborhood for LGBTQ+ individuals. While the organized event at Walhalla Hall highlights an attempt made by those individuals to legitimize these spaces in the eyes of the city (as well try to discourage police harassment—often unsuccessfully), there were many instances of community centers being carved out in more informal–but just as vital–ways.

In the late 19th century, the LES was home to a developing queer subculture. Its geography featured heavily in the memories of Earl Lind (also going by “Ralph Werther” and “Jennie June”), who wrote The Autobiography of an Androgyne. Printed in 1918, this book was one of the earliest memoirs published by a transgender person in the United States. 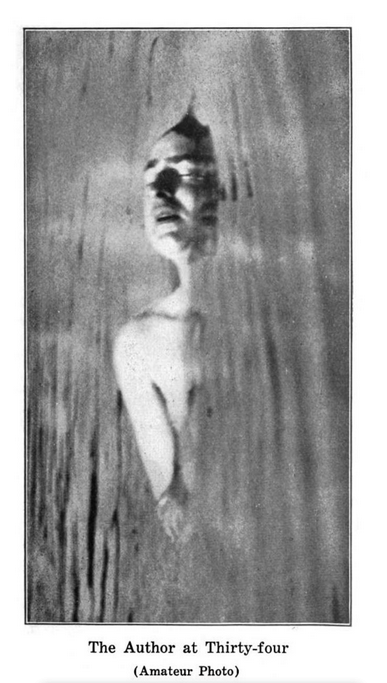 Earl Lind’s, The Female-Impersonators: A Sequel to the AUTOBIOGRAPHY OF AN ANDROGYNE. The Medico-Legal Journal, New York, 1922.

The term ‘transgender,’ however, did not exist at this point. Lind used the identifier ‘androgyne,’ described as someone who was assigned male at birth, but aligned themselves along a spectrum of femininity. Lind also referenced ‘gynanders’, those assigned female at birth but aligning with masculinity, but spoke largely of the personal life experiences of an androgyne.

Lind came from a middle-class background, but often frequented working-class neighborhoods in Lower Manhattan. It was not uncommon in this period for wealthier tourists, such as Charles Nesbitt, to take to ‘slumming,’ touring neighborhoods such as the LES for novelty and thrill. But for Lind, the draw of the neighborhood was for a freedom of expression that couldn’t be found elsewhere.

“I no longer experienced any shame at displaying my feminine mentality everywhere outside of the missions, as no one knew who I was. In many neighborhoods I was hailed as ‘Jennie June.’4

Those neighborhoods in which Lind was known as Jennie June included the Lower East Side, Little Italy, and Chinatown. Almost all of Lind’s ‘beaux’ were described as New Yorkers born to immigrant parents–Irish, Italian, and Jewish Eastern Europeans–revealing the intersection of queer and immigrant narratives in the neighborhood. 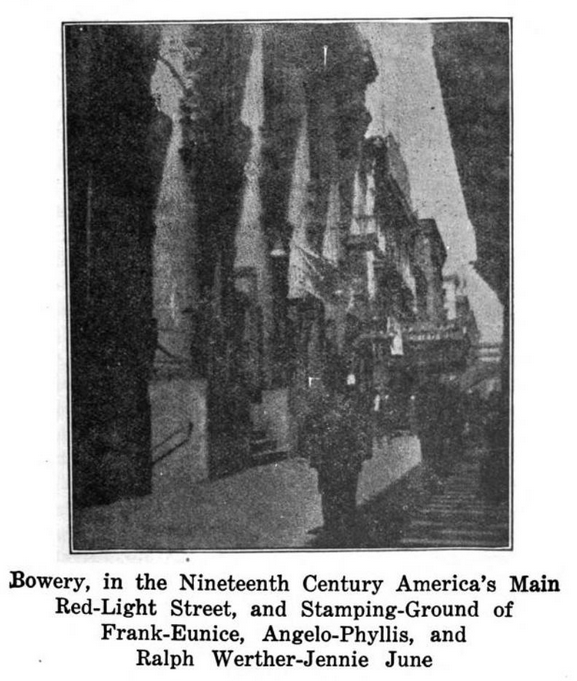 Earl Lind’s, The Female-Impersonators: A Sequel to the AUTOBIOGRAPHY OF AN ANDROGYNE. The Medico-Legal Journal, New York, 1922.

One local establishment named in Lind’s memoires was Paresis Hall, the colloquial name for Columbia Hall located at 392 Bowery (now 32 Cooper Square). Operating as a saloon and a brothel, Paresis Hall was described by anti-vice investigators as a space for “filthy and abominable practices” frequented by “male degenerates”.5 But the essential function of places like Paresis Hall for people like Lind was one of social connection and camaraderie, some measure of safety, and even activism.

Lind recalled sitting alone at a table during an early visit to Paresis Hall, in January 1895.

“I had only recently learned that it was the androgyne headquarters—or “fairie” as it was called at the time. Since Nature had consigned me to that class, I was anxious to meet as many examples as possible.” 6

There, Lind was approached by three people who introduced themselves as Roland Reeves, Manon Lescaut, and Prince Pansy. They extended an invitation to a “little club” they formed called the Cercle Hermaphroditos, created out of a “need to unite for defense against the world’s bitter persecution of bisexuals.”* This was believed to be one of the first formal organizations focusing on transgender social issues in the US, though Lind went on to say “Androgynes, in all large cities, form little cliques like the Cercle Hermaphroditos.” 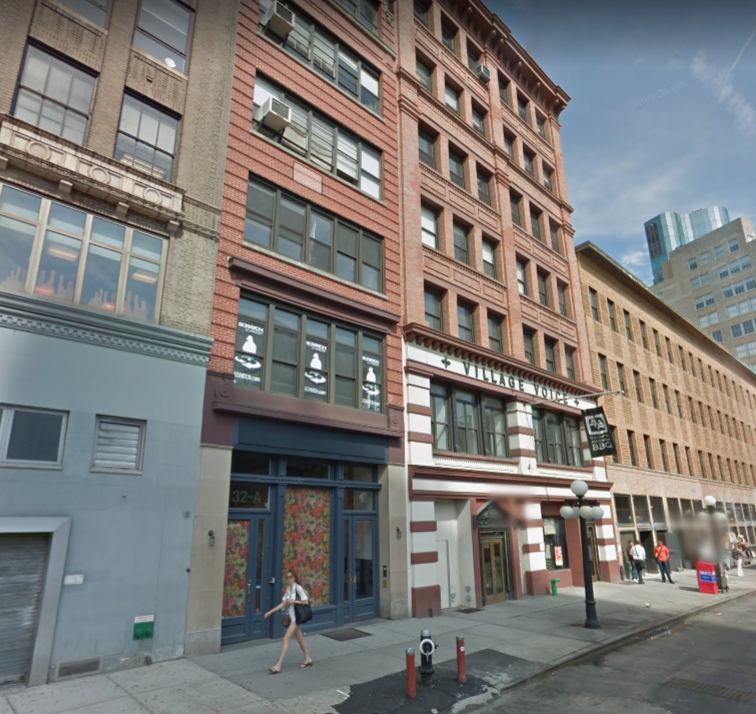 That extant evidence of these organizations doesn’t exist beyond memoirs does not speak to an absence of LGTBQ+ history. Instead it highlights the underground nature in which these communities were forced to organize in their lifetimes, and how the voices of marginalized groups get lost and obscured. By sharing these narratives today, it serves as a reminder that LGBTQ+ people have always existed, have a claim on history, and are an essential part of the story of the LES.

*‘Bisexuals’ is used here to refer to those within the spectrum of a dual male-female gender identity, rather than sexual orientation.