Situated at the corner of Eldridge and Rivington Streets stands University Settlement, a non-profit social justice organization that has a deeply-rooted place in Lower East Side history. While a familiar institution to neighborhood residents today, it would have been just as familiar to the families whose stories we tell at 97 and 103 Orchard. A mere two blocks away from their homes, University Settlement easily could have been an integral part of their lives. 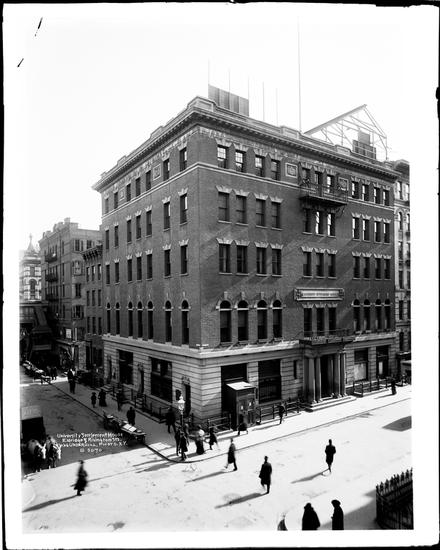 University Settlement began in 1886 as the Neighborhood Guild, and was the first settlement house created in the United States. Founded by reformers Stanton Coit and Charles B. Stover, University Settlement was started to provide resources for the predominantly immigrant residents on the Lower East Side. Settlement houses were named as such because the aim was that their staff and volunteers would ‘settle’ in the community as neighbors.

The hope was that these institutions would foster an exchange of learning rather than of “mission-izing”: that settlement workers could teach valuable things to neighborhood residents, but that those residents had important lessons to teach staff as well. William English Walling, a socialist writer and one of the white founding members of the NAACP, worked at University Settlement at the turn of the 20th century, and offered some advice to his colleagues: “[M]ake friends with these settlement people and listen, listen all the time. They’ve got a lot to teach us boys, so for the love [of] Jesus Christ don’t let’s be uplifters here.”

The staff and volunteers at University Settlement often came from wealthier families, and many were recent college graduates. While the majority of the early workers were men, more and more women soon found work and leadership positions there as well, such as Eleanor Roosevelt, who taught dance, and Rose Pastor Stokes, a social activist and political writer.

By 1898, the organization moved from the basement it started in on Forsyth Street, into its newly constructed home at 184 Eldridge Street, where it still stands today.

From its inception, University Settlement offered a variety of services to the surrounding community, including recreational camps and classes for children, resources for residents to advocate for neighborhood issues such as housing or street sanitation, and classes about obtaining U.S. citizenship. By 1911, University Settlement hosted 142 different clubs with over 3000 members, and regularly rented out its spaces for unions and reform groups to hold meetings.

Its legacy continues today, serving over 40,000 New Yorkers of all ages every year, across 30 different locations in the city. Its services include childcare and youth programs, creative productions and classes, mental health services, legal help, and college and career planning. These programs are held in multiple languages, including Spanish, French, Cantonese, and Mandarin.

While its physical doors are currently closed in light of Covid-19, their work continues. Over the past two months, University Settlement distributed meal boxes, PPE, and supplies to their communities, and continue to connect people to resources and support networks around New York City. The organization is also serving as a platform for community members to make their voices heard on city issues, and is joining in the national protest against anti-Black violence, police brutality, and racism.

University Settlement’s enduring existence today speaks not only to how vital its work continues to be, but also how it has continually grown and learned from the neighborhood it settled in over 130 years ago.

To keep up to date with the work University Settlement is doing now, you can find them on Twitter @UnivSettlement and Facebook @UniversitySettlement.

Our #USCAMPOSRECOVERYTEAM hard at work distributing meals yesterday for our communities. Like and share this tweet to stand in solidarity with Human Services workers and with our partner @cpc_nyc. #AlwaysEssential #NoRecoveryWithoutUS pic.twitter.com/Yd6hFwmQGG