This is the final part of a four-part series documenting the search for the grave of 97 Orchard Street’s first landlord, Lucas Glockner, in Green-Wood Cemetery, a 478-acre cemetery in Brooklyn that opened in 1838. Begin with Part I: The Forgotten here.

Perhaps it was the thrill of finally knowing the final resting place of Lucas Glockner, or the anxiety that his monument may now be nothing more than a worn broken stone, but we took a wrong turn somewhere and are desperately lost in the cemetery. 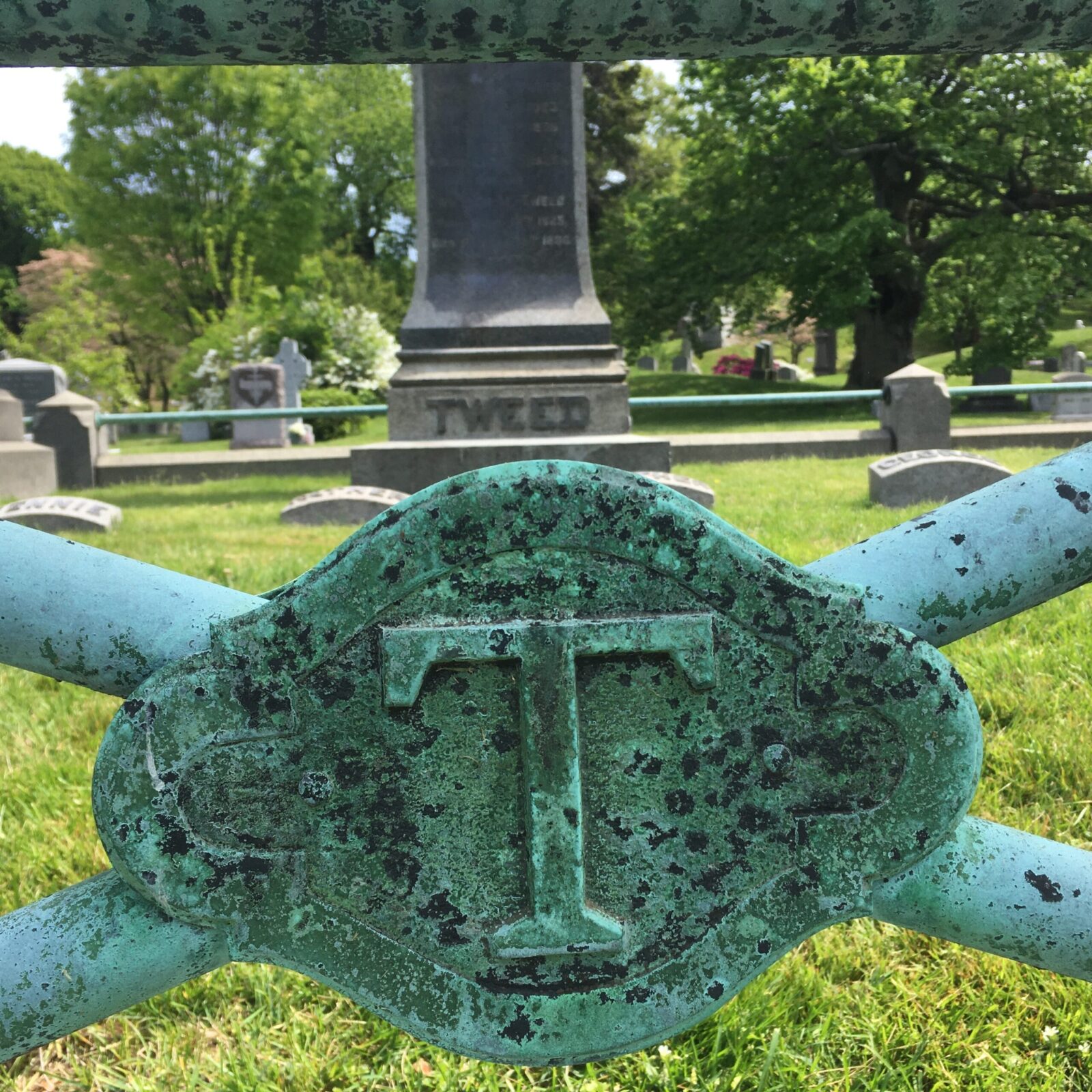 By some strange twist of fate, we stop to consult our maps at the entrance of the lot belonging to William M. Tweed. The Boss. There is a bold, permanent quality to the headstones, while also being rather understated. Not what you might expect from someone as notoriously power hungry as Boss Tweed. Maybe this is what you get when you start off a humble chair maker and rise up to become the leader of a powerful Democratic machine, only to be disgraced and jailed for corruption.

Tweed’s rise to power coincides with Glockner’s construction of 97 Orchard Street. In 1863, as Glockner’s tenement scraped the sky, it’s five stories towering over the surrounding single-family row-houses of the Lower East Side, Tweed settled into his position as New York City Deputy Street Commissioner. Five years later, Tweed held three offices simultaneously: Supervisor for the Democratic Party, State Senator, and Street Commissioner, making him the undisputed leader of Tammany Hall – a New York City-based democratic society founded in 1789. As “Boss,” Tweed was perched at the center of a criminal profiteering network known as the Tweed Ring. Persistent journalists from The Times eventually exposed this thieving band, manifesting in Tweed’s arrest.

In 1873, Tweed was sentenced to 12 years of imprisonment for indictments including forgery, conspiracy, and larceny. Following a year of imprisonment at Blackwell Island, Tweed was transferred to the Ludlow Street Jail, a mere three blocks away from Glockner’s tenement house. On December 4th 1875, Tweed staged an escape from the jail, and though a fugitive, enjoyed a brief period of freedom. Recaptured in November, 1876, Tweed was promptly returned to the Ludlow Street Jail where he remained until his death on April 12, 1878. His final words, according to The New York Times, are strangely ambiguous, “They will be happy now.”

My partner pulls me back from this reflection. She’s found the way to Glockner’s grave, and off we go! But a part of me lingers at the threshold of Boss Tweed’s burial gate, nostalgic for a time when corrupt populist politicians were convicted of their crimes.

It’s a winding way and in our excitement, we are practically running. According to our map, Glockner’s family lot number is 13672, but I don’t see numbers anywhere. We slow down on Linden Avenue after coming upon the lot for St. Ann’s Church. Glockner is supposed to be across the street from there… but where? Parking the stroller, we release our daughter to explore in the grass, while we search stone by stone for names. We go separate ways to cover more area all the while watching the kid. Though I sense I went too far, I continue. None of the stones I see have names. Lichens and grass are overtaking them. I’m about to give up, when I hear my partner say, “He’s here!”

And now I am running. 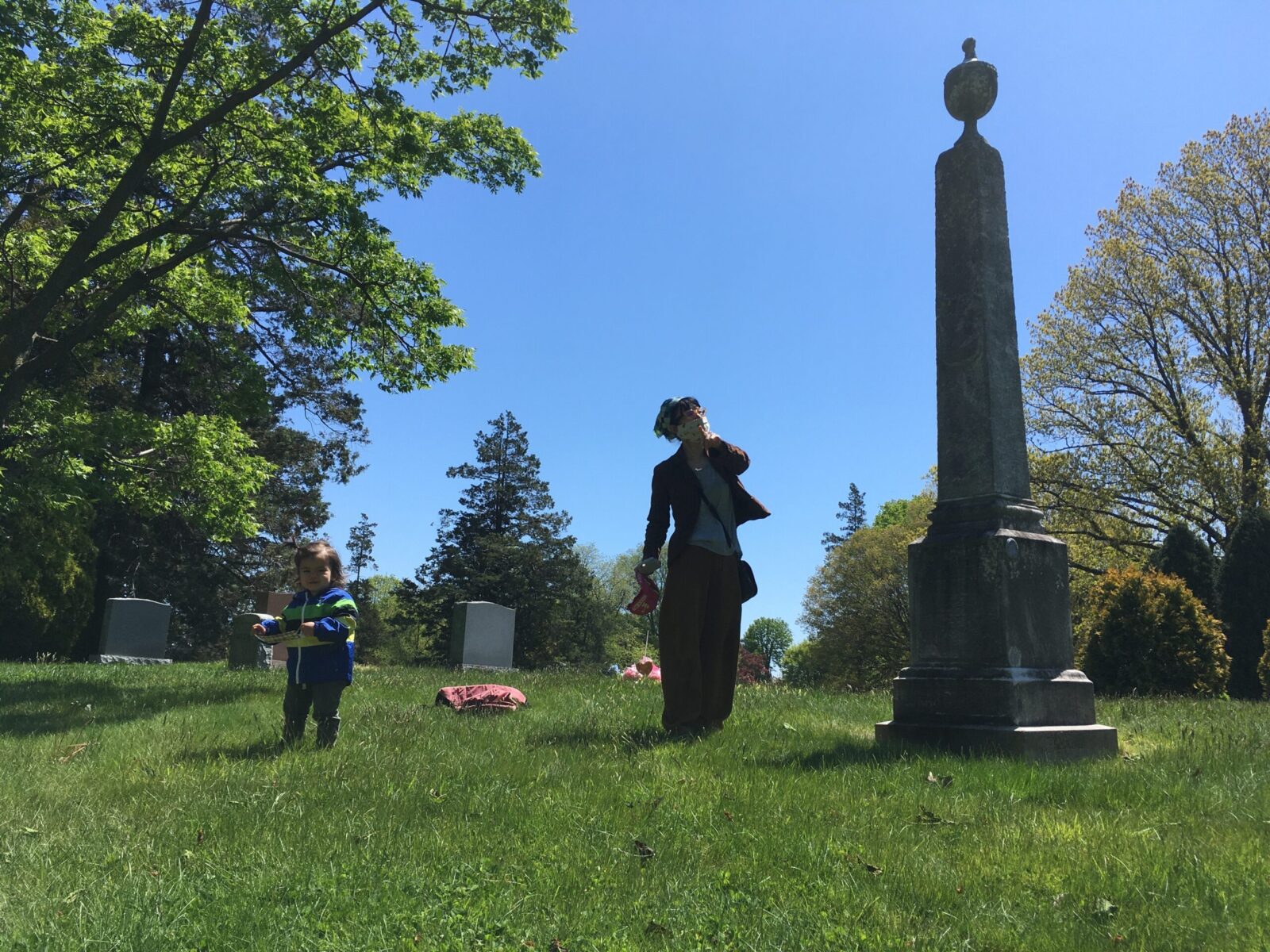 Topping a hill, I see my partner and daughter standing beside a tall stone obelisk crowned with a carved urn. There at the base, spelled out in capital letters – worn but still legible – is the name LUCAS GLOCKNER.

The stone is pitted – streaked from wind, rain and sun so only some of the text is legible. The north-facing side of the obelisk contains the outline of a crest bearing the words, OUR MOTHER. And on the base, above Glockner’s name, is a devotional panel that reads, ”Catharina Nickel, Beloved wife of Lucas Glockner.” If there are any other names carved into that panel, you would need a time machine to read them. My initial excitement gives way to the melancholy of impermanence and the mystery that compels us to use objects as a way to remember.

Lucas buried his first wife Catharina in Greenwood Cemetery on October 19, 1862. Was this monument constructed at that time? As an object of memory, it is clearly a devotion to Catharina – Our Mother, the Beloved Wife. But not one of the three children Catharina was mother to is buried in that lot.

Lucas’ second wife, Wilhelmina, is interred alongside his first beloved, along with three of the four children they had together. Lucas himself was buried here on October 4, 1891. Their youngest child Ida appears to have assumed control of the lot at some point, arranging to have her husband George Neumann buried there. She herself was buried on February 3, 1955 – the last in the lot.

Was there a rift in the family? Did the children Lucas had with Catharina object to his second marriage and establish lots for themselves elsewhere? Rather than closure, this grave inspires further inquiry.

Perhaps this is true of all memorial objects – whether carved in stone or cast in bronze, they fall short of answering the messy complicated details of a life. With time all monuments fade – and thus, freed from their attachment to a specific individual, their ruins become poetic representations of us all.

I wonder how my daughter’s relationship to these objects will change over time. Currently they are little more than stone shapes, but already she senses their deeper meaning. Here she is now, gently placing a chestnut at the base of the Glockner family monument. And there she goes, resuming her role as tour guide, leading us home. 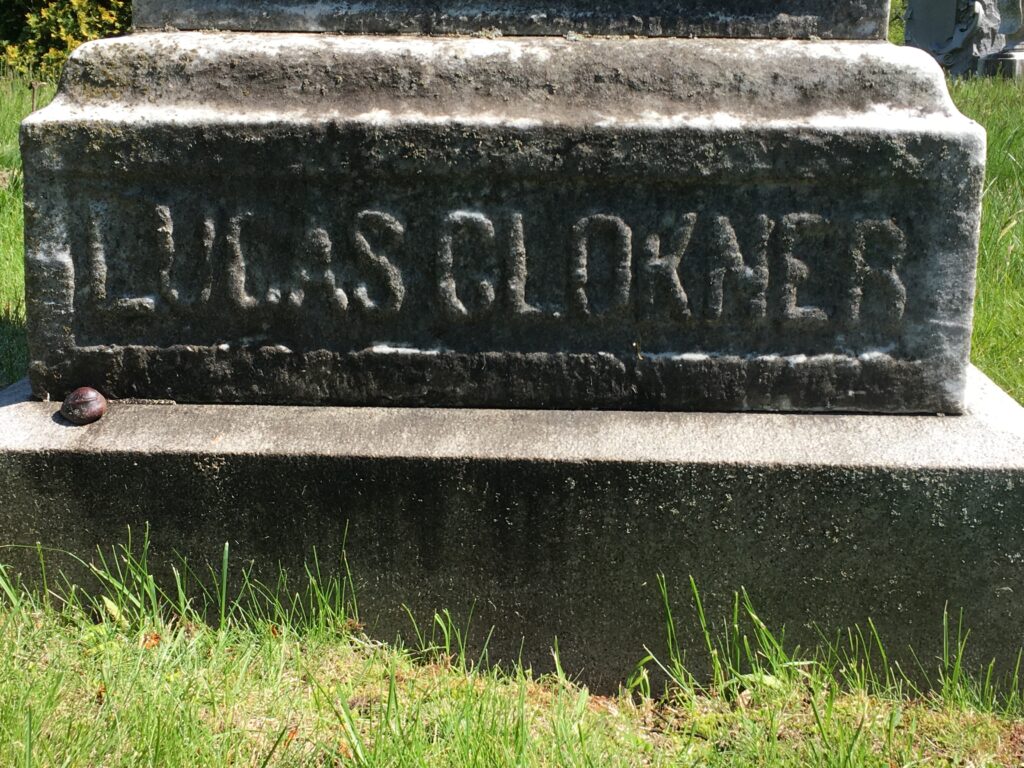