Tenements are an indelible part of New York City’s architecture, and a large part of the cultural and popular memory of the Lower East Side. Yet this was not always so. A walk down Orchard Street in the 1830s would have revealed the dormer windows and peaked roofs of row houses. While not many survive in the Lower East Side today, those that do reveal a rich past of the neighborhood and help contextualize its changes.

A point of definition – row house can be a broad term, but generally describes a two to three story, brick, single family home, and as the name implies built in a row of identical houses. 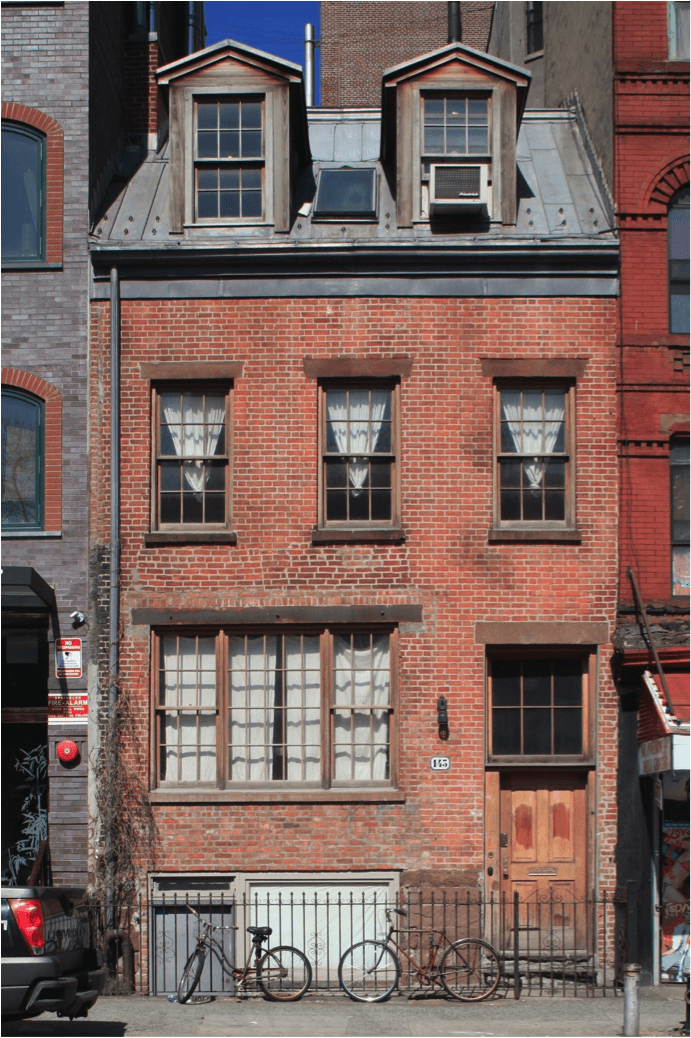 A brick structure standing at about two and a half stories tall, 143 Allen was constructed between 1830-1831, and is probably the most well-preserved row house in the neighborhood. It is a sterling example of Federal architecture, which was most popular in the late 18th and early 19th century. Federal style was a conscious choice by a young United States to link itself to Grecian democracy and Roman Republicanism. Pediments (triangular features found on the tops of buildings, entranceways and windowsills), columns friezes (decorative trim) and high peaked roofs make up just some of the features common to Federal architecture. While 143 Allen has lost some of these features over time, its entrance way, brownstone windowsills, and lintels still remain, as well as the Flemish bond brick work, a hallmark of the style. The effect is achieved by alternately laying the stretcher (long side) and the header (short side) of a brick.

Peeling back the facade, so to speak, reveals a narrative and history extending all the way back to the 17th century. Before the Lower East Side was known as such, and when New York was still New Amsterdam, the plot that 143 Allen sits on was once owned by Bastien Negro, a resident of the Land of the Blacks, a free African community that began in 1644. Although this freedom was conditional, contingent upon regular tax payments to the Dutch, it represented a substantial place of agency. Much of the work in the community revolved around farming, although it is unclear what specific work Bastien did. One source notes him as a “Captain” of the free Africans, and perhaps he took on some supervisory role. Eventually encompassing 130 acres (roughly 100 city blocks today), just north of New Amsterdam, the expiration of the grants, changing colonial administrations, and weakening of Black rights would erode this community and history.

Passing through various hands over the years, it would be eventually be acquired by the De Lancey family. One of the descendants fled to Great Britain during the American Revolution because of his loyalist sympathies. The land was then expropriated, parceled up and sold off, and eventually acquired by a merchant named George Sutton, who built 143 Allen and five other buildings on the lot. Once on the periphery, the Lower East Side was quickly being absorbed into the urban milieu, and was well poised to take advantage of the northward growth of the city. Sutton would eventually sell it in 1843, after which it was divided into multiple units. Sometime in the 1910s, it was further converted for commercial operations.

The very urban expansion of New York that led to the row house would also be the harbinger of their decline. Immigration from the German States increased in the 1840s. Homes that had been conceived for single families were converted to fit three, four, or even eight, often in some unscrupulous ways. 143 Allen listed 15 residents in 1910. Built on the same 25×100 foot lots used by the row houses, employing uniform apartment layouts and standing two to three stories higher, tenements would ultimately prove a better solution to meet this incoming demand. These too had their flaws however, but that is an exploration for another time.