It is hard to explain my sense of joy when a pet pops into a Zoom meeting. One minute we are talking about an excavation that took place in the early 1990s and the next we are learning about the particular sound Waffles the dog makes when trying to get some attention. It offers a distraction from work and a nice moment to watch smiles spread across the Zoom grid as people notice Waffles, but it is also causes a pang of jealousy that I cannot cuddle with him. (I can’t have a pet because my landlord doesn’t allow it.)

Pets play an important role in people’s lives— companionship, comfort— and that would have been the same for the former residents of 97 Orchard Street. Learning about these pets offers insight into the daily lives of residents as well as a fun puzzle because they are not on census records or building directories—two primary sources we rely on heavily. Pets are part of oral histories, photos, newspaper articles, and even some laws.

An 1865 article from the New Yorker Staats Zeitung, the German language newspaper written by and for the population living in the neighborhood then known as Kleindeutschland or Little Germany, lists Pinky, a small silk poodle, as missing. This one announcement gives us some key information and brings up even more questions. First, someone named Adolph Schmager lived in 97 Orchard Street. From looking at other sources we’ve also learned that Schmager came from Berlin with his wife, Minna, and that he fought in the Civil War. He started as a Private in 1861, became a Captain in 1863, and was mustered out October 1, 1865. So, when Pinky goes missing in July 1865, Adolf was most likely not home and it was his wife, Minna, who initiated the search. Adolph was likely the one listed on the ad because he would have been considered the head of the household. Pinky was described as a “small silk poodle, white with brown ears.” 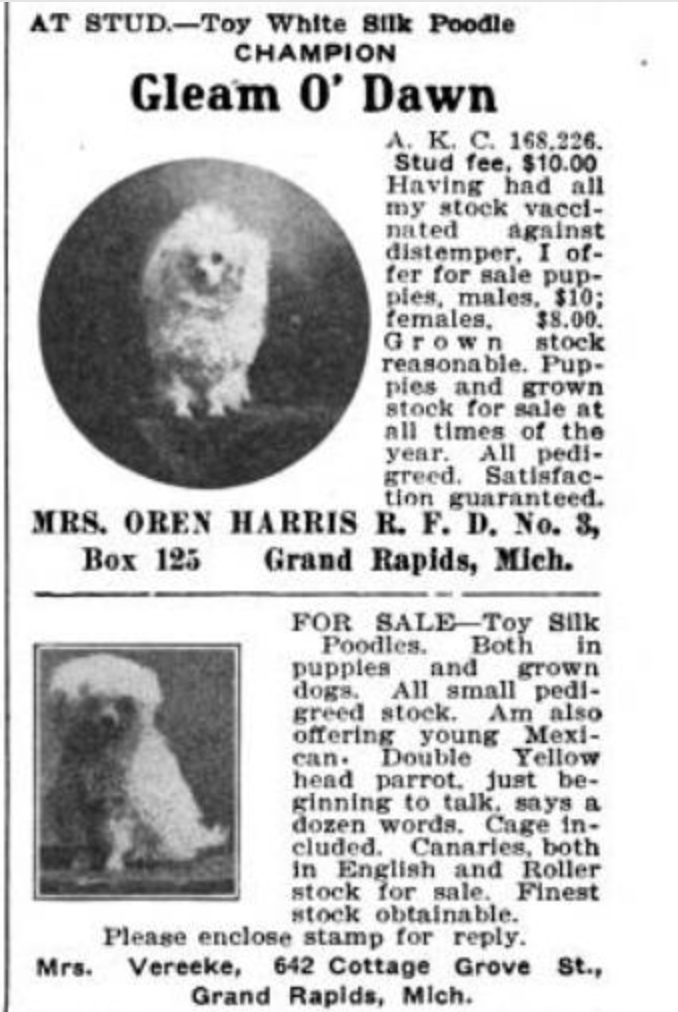 Here is a 1918 ad for a toy white silk poodle for us to get a little bit of an idea of what Pinky might have looked like. We don’t know if Pinky was ever found, but we know that Adolph and Minna Schmager clearly cared for Pinky, offering a $5 reward on top of paying for an ad in the newspaper. Five dollars was no small sum of money. We estimate rent to have been $10 per month for a three-room, 325 square foot apartment in the 1860s. Money is certainly not the only way to gauge care, but it is the metric available to us here. I hope that Pinky and the Schmagers were swiftly reunited.

We do not know if Eastern European immigrants Jacob and Sarah Burniescu had any pets when they moved into 97 Orchard in 1917 with their five children. However, by the 1930s their youngest daughter, Jacqueline Burinescu Richter, lived on nearby Allen Street with her husband and a dog named Boopsie. We have a few pictures of Boopsie in our collection. People were taking more pictures of everyday life by the 1930s, but not nearly as many as today. Each picture used film, which cost money, so the fact that the Richters took pictures of Boopsie show that they cared about capturing memories with their pet. 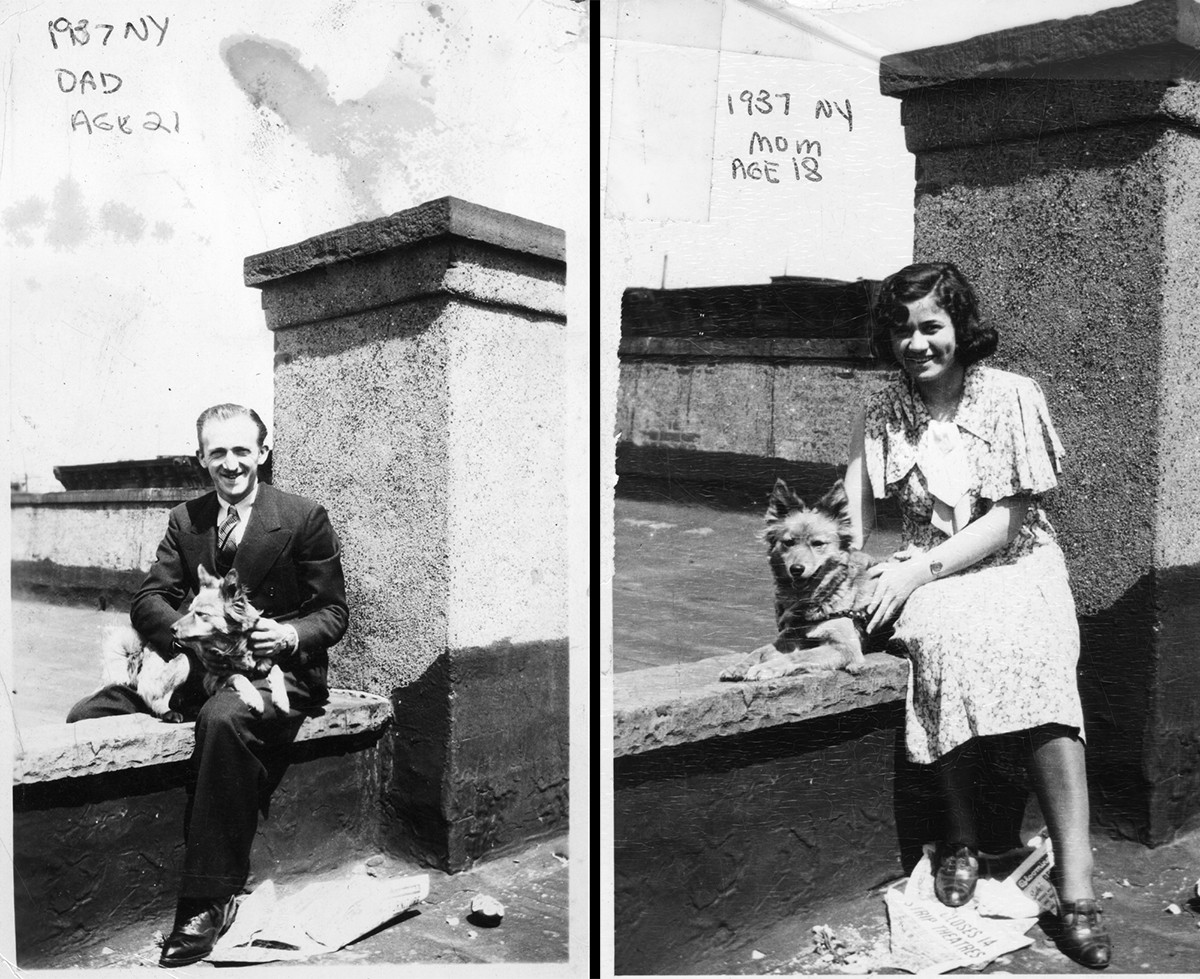 Dogs were not the only pets former residents remembered having. Josephine Baldizzzi lived in 97 Orchard as a young girl with her brother, Johnny, her Sicilian immigrant parents, and a cat in the 1930s. Josephine remembers her father, Adolpho, a cabinet maker, being quite fond of pets in general: “…we had a canary, and we had a dog… and we had a cat. My—my father loved all this. You know, we had a dog, he was black and white, I remember… And the canary died when my father died. The canary went too. But that was here when we moved to Brooklyn. But in—on Orchard Street we had a cat, and we brought the cat with us when we moved, and the cat went berserk.” Adolpho was clearly an animal lover, and given Josephine’s description I imagine he had a particularly close relationship with the canary. The only pet they seemed to have had in 97 Orchard was the cat, who apparently did not transition well into life in Brooklyn. A cat was probably a pretty good pet in a tenement apartment. They are small and they can hunt mice. Honestly, those are pretty good arguments why you might want a cat in New York City today.

There were almost certainly other pets in the building over time. The Tenement House Department reported that families living in tenement buildings sometimes kept chickens as pets and for their eggs. (A trend that is returning due to high egg prices during the pandemic.) When my daydreams take on a more rural tone, I imagine I have goats, chickens, and a vegetable garden. Pet Zoom sightings and my window-sill herb garden will have to do, for now at least. 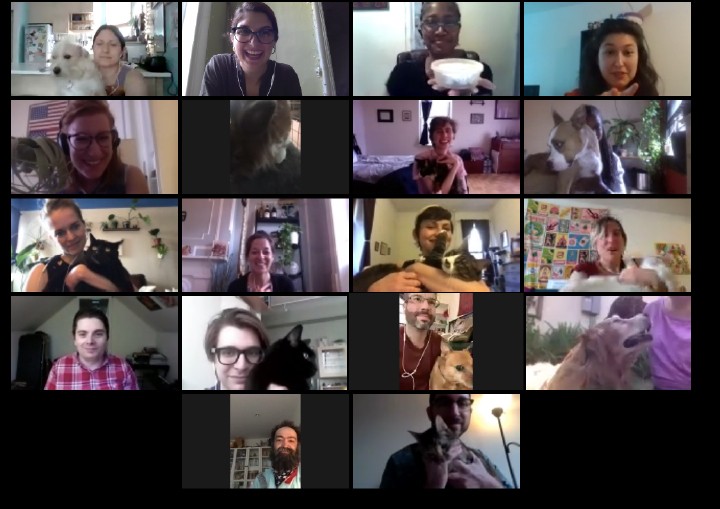 Clipping from the September 1918 issue of Dog Fancier

The Richters on the roof with Boopsie, 1937. Tenement Museum Collections