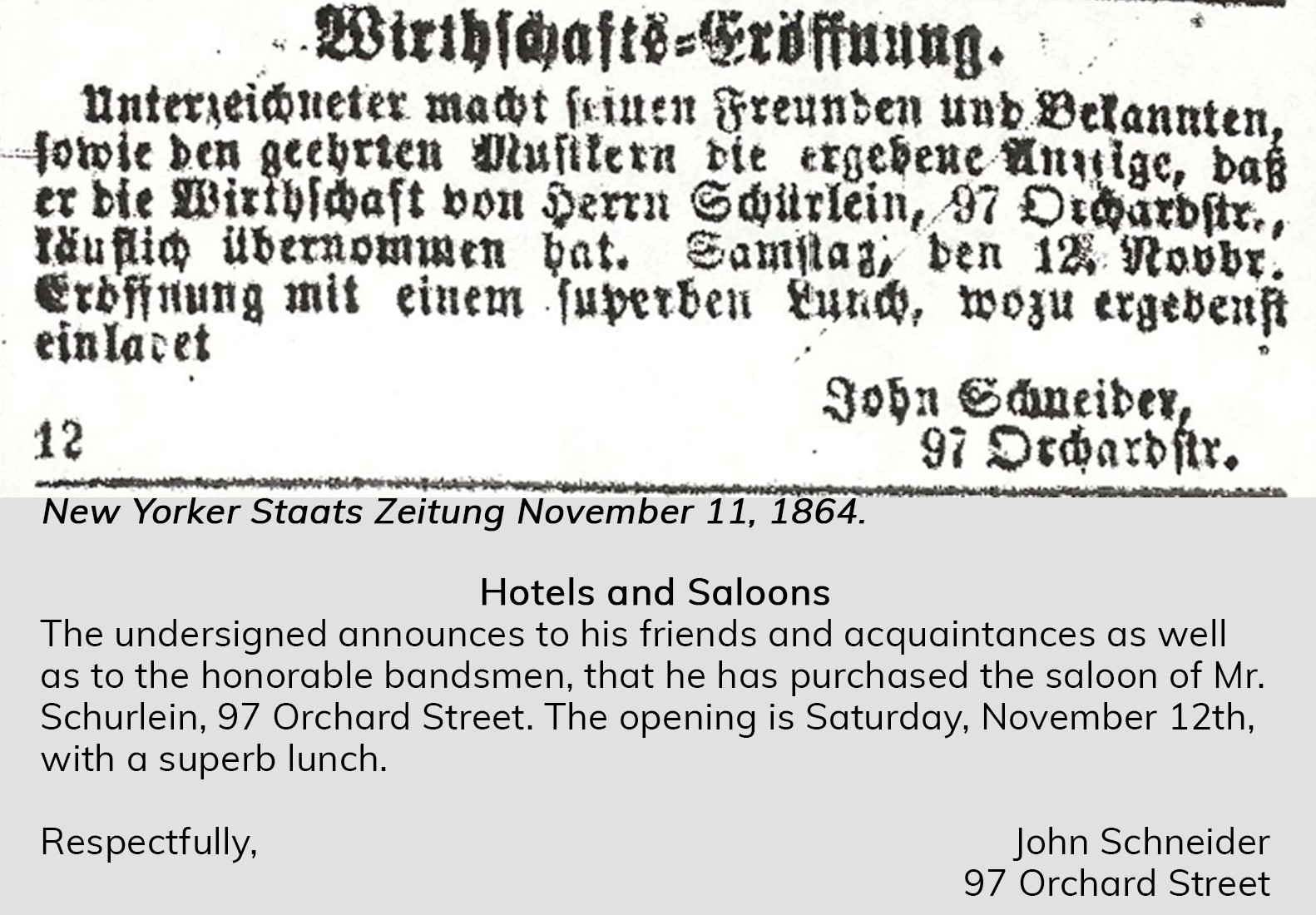 On November 11, 1864, New York’s leading German language Newspaper, the New Yorker Staats-Zeitung, announced the grand opening of a saloon in the basement of 97 Orchard Street. This wasn’t exactly breaking news for the German immigrants living in New York – many of them concentrated in the tenement districts of the Lower East Side (a stretch of the City then referred to as Kleindeutschland). By 1864 the number of Kleindeutschland saloons already exceeded 500.  John and Caroline Schneider, the proprietors of the saloon at 97 Orchard, made the most of their grand opening announcement, working hard to distinguish their saloon from the myriad others. The announcement reads like a targeted invitation to John’s ‘friends, acquaintances, and honorable bandsmen,’ and boasts of a ‘superb lunch.’ A casual reader might be lured in just for the free lunch and music. But by using the term ‘honorable bandsmen,’ John may have been reaching out to one specific audience: veterans of the American Civil War.

By no means was the 8th New York the only German Regiment to enter the field of combat. There were 9 other “pure German” regiments, together consisting of 12,000- 15,000 German immigrant New Yorkers.2 The whole of New York City, Kleindeutschland in particular, practically vibrated with martial activity. In a vivid and rare memoir donated to the Museum by the Bisk family, Barnett Bisk, the child of German immigrants, recalled how war preparations influenced his childhood in Kleindeutschland.

“During the summer of 1861, the spirit of militarism seemed to permeate the air. At Rutgers Square, one block from our house, could be seen nearly every day the drilling of raw recruits in preparation for the seat of war. This drilling mania would be taken up by the boys on the streets who formed small companies and did marching for amusement.

In the Henry Street School, the boys of the highest class were drilled to march like soldiers under the guidance of C.H. Kimball, the Principal…I never attained the distinction of being a member of his marching class, although I had a great desire to be one.”3

Local newspapers stoked the flames of military pride and patriotism, using heroic language to describe the soldiers. Regimental bands are mentioned in nearly every article from the early days of the war. Parading ‘to the music of their full drum corps’ or with ‘a splendid regimental band,’ the soldiers ‘marched with…precision and spirit” and ‘won the admiration of all the beholders for their manly and soldierly bearing.’4

So it was that as spring turned to summer, the 8th New York paraded down the streets of New York City to join the field of combat. As with every regiment in the early days of the Civil War, residents of the city, young and old, lined the streets and crowded tenement windows to behold the soldiers as they marched to their encampments. The German regiments drew as large a crowd as any other band of fighting men. While German immigrant volunteers tended to join German regiments, they drilled, marched, and went into combat wearing the uniforms of the Union Army, the Stars and Stripes flying above them.

To the revelers, ethnic identity was second to national identity, but for the German immigrants, their conception of military service was somewhat more complex. Volunteers from the German states broadly saw their participation in the military as an opportunity to prove their place in America. Rising to meet the challenges of nativist discrimination, German volunteers fought for acceptance and incorporation as much as they fought to preserve the American Republic. The liberty many enlisted to defend included the freedom to be German in America. In this way, the German Regiments for the Union served a dual purpose: to officially incorporate German Immigrants into the larger American Republic, and to highlight German identity and culture. And so, marching down city streets and into combat, with John Schneider and his bandsmen playing popular American tunes alongside traditional German marches, the members of the 8th New York might feel a swelling of pride for both their new and old homelands.

For a brief moment, John Schneider (a soldier on his way to combat), and Barnett Bisk (a child caught up in martial spirit), shared a common sense of imagination and excitement. The regimental bands did their part to preserve this spirit, keeping the mood upbeat in camp performances. But sobering marches to Confederate strongholds and the chaotic violence of war shattered all romantic notions. Regimental band members were kept in the rear reserve to assist the medical corps. During clashes with Confederate regiments, band members doubled as ambulatory paramedic units, assigned to collect the dead and return the wounded to field hospitals, and to assist doctors with surgeries and amputations.

On June 8, 1862, the 8th New York Volunteer Infantry Regiment engaged an apparently small picket of Confederate soldiers at Cross Keys, Virginia. The commanding Union officer, Colonel Wutschel, ignored orders to wait for reinforcement Union Regiments to arrive, and instead directed his men to attack the enemy picket. With bayonets drawn, the First German Rifles charged uphill in pursuit of the retreating Confederate picket.

Every Confederate victory spelled a longer conflict for the enlisted men. The longer the war raged, the more costly it became – as much in terms of lost lives and destabilized families as in military expenses. Regimental bands, while valuable for preserving a waning morale and for ambulatory aid, began to seem too expensive to maintain. On July 29, 1862, President Lincoln signed General Order 91, officially putting an end to regimental bands. John Schneider and 6 other members of the band mustered out of the German Rifles on June 28, 1862, twenty days after the brutal loss at Cross Keys and a month prior to General Order 91. He returned to New York City to start life over as a veteran of the Civil War.

Six months after his return, on January 22, 1863, John married Caroline Deitmann. They were living together in the home of John’s family, 234 44th Street. As their marriage certificate indicates, John was employed as a shoemaker and a musician; music remained an important part of John’s life, even though it may not have been enough to pay the bills. It was, in part, through music that people maintained a sense of hope and pride, despite the ongoing despair of the Civil War.

In New York City, publishers of musical broadsides released songs celebrating the Union cause, many highlighting the German regiments and their generals. Our German Volunteers, published in 1862, is an intriguing example. It is printed in English, suggesting that the target audience extended beyond Germans living in America. The song is musical evidence of the effort to prove the German community’s devotion to, and place in, America. For the German listener, the song is a history of honor – a way to remember critical moments where German regiments and generals faced down their Confederate foes.

As with all Union Army units, German regiments lost many of their battles against the Confederacy. Yet German regiments were disproportionally criticized following their defeats.08 Events surrounding the Union defeat at Chancellorsville (April 30- May 6, 1863), in particular, rekindled deeply held anti-German nativist sentiments. On May 2nd, members of the XI Corps, largely consisting of German immigrants, were taken by surprise and overrun by a mile-wide Confederate advance. Outgunned and unprepared, the XI Corps retreated to the rear in panic, leaving 22% of their men dead on the battlefield.7 As these fleeing soldiers were predominantly German, and ‘Dutch’ being a contemporary synonym for Germans in America, the men from the XI Corps were branded ‘Flying Dutchmen’. In the aftermath of the battle, the XI Corps became the scapegoats for the defeat at Chancellorsville. This nativist assertion that Germans were inherently untrustworthy and cowardly gained traction. Survivors of the XI Corps endured the humiliation of both their defeat and damaged reputation. Nativist biases expanded quickly beyond the XI Corps’ ranks to impact all German volunteers, despite their continued dedication to the Union fight.

Germans in America responded to this prejudice in various ways. Some soldiers resolved to stand proud against the notion that they were cowards, and put greater effort in their fight. As Colonel Ernst von Vegesack noted of his soldiers, “My regiment, which was the first in the Army of the Potomac, is now demoted and the only way to restoration is to fight like lions.”9  Some, like Robert Rossi, the bugler for the First German Rifles became bitter and defeatist. In a letter home, Rossi notes “Even though I will never regret having been a soldier, nothing in the world could make me want to go through what I experienced again, and when a friend of mine says he wants to go, I advise against it as strongly as I can.”10 A sense of ambivalence settled in. Many on the battlefield and in communities like Kleindeutschland felt betrayed; that even after putting their lives on the line in service of the Union cause, it seemed that Germans would never be fully accepted as Americans. 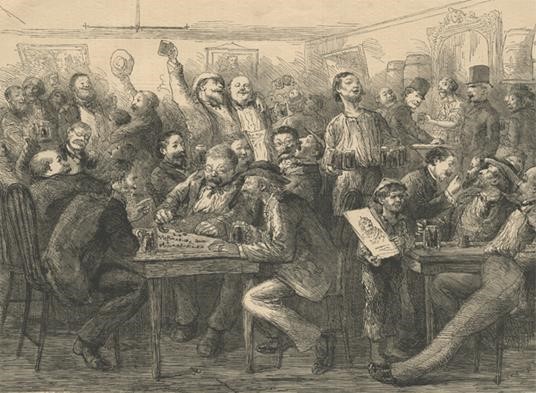 Indeed, it may have been the devastation of the Draft Riots that inspired John and Caroline to make a new start by moving to Kleindeutschland. In November of 1864, John and Caroline Schneider opened the doors to their lager bier saloon at 97 Orchard Street. There was a superb lunch. There was beer. There was sure to be lively conversation. There was the promise of music. One can imagine John picking up his instrument to join the honorable bandsmen he invited to the saloon. The song might be an old one from Germany, a new one from the broadside publishers of New York City, or a regimental favorite.

Stepping into John and Caroline’s saloon as a friend or acquaintance, you might struggle to talk over the music or sing along with it. You might find people remembering their old life in Germany, or their old life in America, before the Civil War. You might find people trying to forget their current struggles, or their recent memories of battle and hardship. You might hear people reminiscing about their time in the war – victories and defeats, friendships preserved and friends lost. But no matter how they passed the time here, people in John and Caroline’s saloon were negotiating their place in America. Along with lager bier and superb lunch, these saloons offered a space for the Germans in America to be Germans in America- a space where expressions of pride revolved around a sense of belonging to both an old and new home, at the same time.

1 Fifth Annual Report of the Bureau of Military Statistics with Appendices, 1868 p.172

6 Fifth Annual Report of the Bureau of Military Statistics with Appendices, 1868 p.172