Up Next: Conclusions View Exhibit Map

The New York Times broke the story in July 1981 with a report titled “Rare Cancer Seen in 41 Homosexuals. It read:

“Doctors in New York and California have diagnosed among homosexual men 41 cases of a rare and often rapidly fatal form of cancer. Eight of the victims died less than 24 months after the diagnosis was made. The cause of the outbreak is unknown, and there is as yet no evidence of contagion. But the doctors who have made the diagnoses, mostly in New York City and the San Francisco Bay area, are alerting other physicians who treat large numbers of homosexual men to the problem in an effort to help identify more cases and to reduce the delay in offering chemotherapy treatment.” 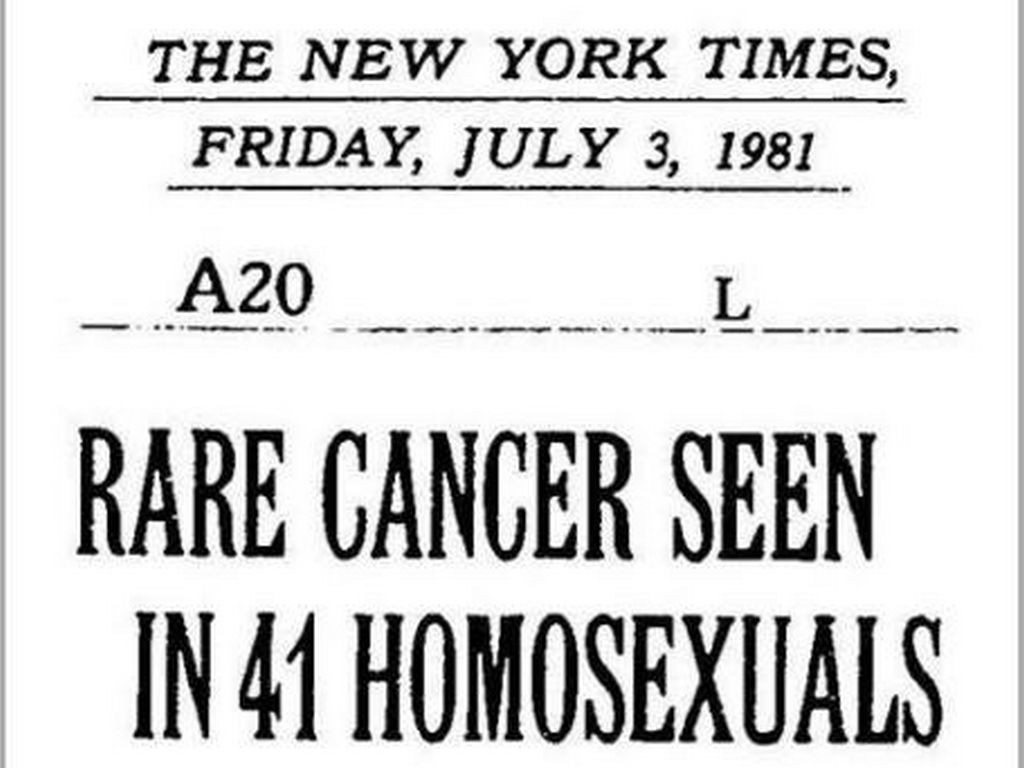 First Use of “AIDS”

In September 1982, the Center for Disease Control (CDC) used the term AIDS (Acquired Immune Deficiency Syndrome) for the first time, describing it as a disease predictive of a defect in cell immunity. In June 1982, AIDS was also reported in intravenous drug users, hemophiliacs and Haitians. Before adequate medical research proved otherwise, the high rates among Haitians lead many to believe that the disease originated in Haiti. In January 1983, AIDS was reported among the female partners of men who had the disease, establishing a connection to heterosexual intercourse. The CDC was struggling in vain to keep pace with the speed of the virus, and to prevent panic and misinformation from spreading.

By September 1983, the CDC ruled-out transmission by casual contact, food, water, air, or surfaces. In April 1984, the National Cancer Institute announced they had found the cause of AIDS: the retrovirus HTLV-III. Approximately one year later, the U.S Food and Drug Administration licensed the first commercial blood test to detect antibodies to the virus, making its possible for blood banks to screen the USA blood supply. 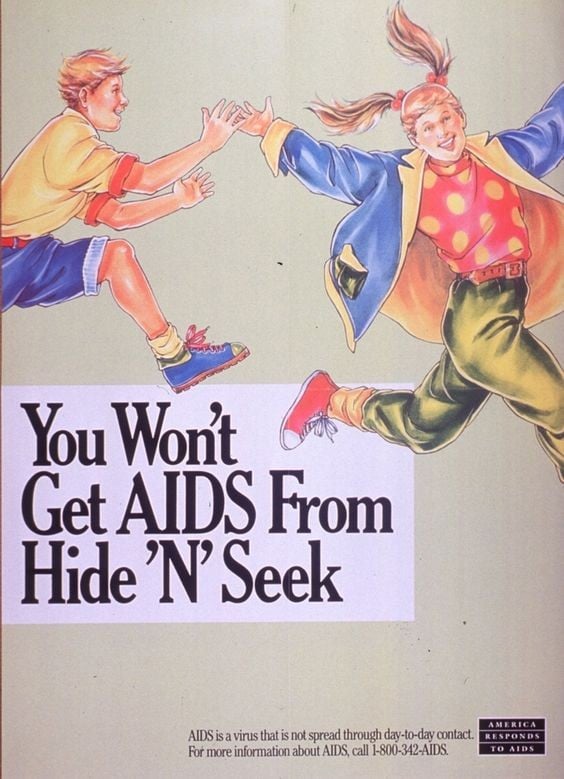 New York City was not above the rising panic and moralism. In the fall of 1985, the New York Republican mayoral candidate Diane McGrath called for mandatory testing of all teachers, food handlers, health care workers, bakers, and prostitutes and the banning of those found to be infected from their trades. Two local school boards in the borough of Queens launched a boycott demanding that no child with HIV/AIDS be permitted to enter the classroom. Hospitalized patients reported that orderlies were refusing to provide them with appropriate care. These acts of discrimination interfered with official medical responses, and compounded the impact on already marginalized people suffering from this disease.

“Despite epidemiologically-rooted reassurances from public health officials, public anxiety, especially in the first years of the epidemic, continued to fuel acts of discrimination that would repeatedly be denounced by health officials as unscientific, irrational, and counterproductive

Campaigns to alert and educate were slow to come in New York City. David Sencer, former director of the CDC, was Commissioner of The Department of Health for New York City from 1981-1985. Initially he was not convinced that HIV/AIDS would pose a grave threat. As the case number increased and crossed beyond the gay communities, the Department of Health had to intervene. Sencer recognized that any public health effort to control HIV/AIDS would need to overcome the deep fear and suspicion that gay men had towards state agencies. This recognition was a key element in shaping his initiatives but mired in bureaucracy, the official response in New York was dangerously slow compared to other cities.

Activists took the lead in response to the institutional vacuum. The Gay Men’s Health Crisis (GMHC) was formed in 1982. As a voluntary association devoted to education and service, it would ultimately serve as a model of communal self-help efforts in both the United States and Europe. Historian Susan Chambré argues that the activist response in New York “included the largest number, and most specialized, of formal and informal AIDS organizations in the nation.” 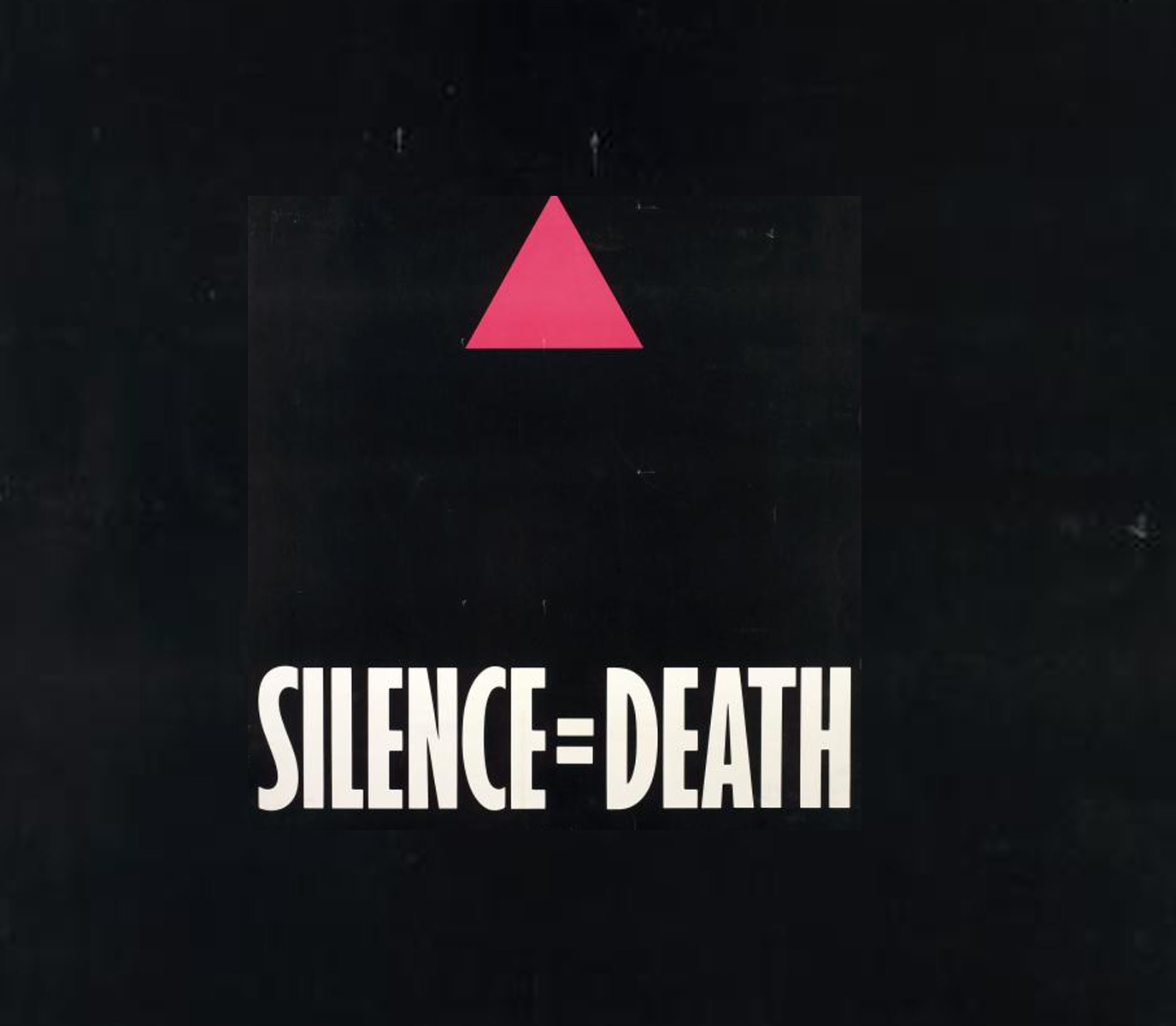 New York–based organizations were often the first of their type, including GMHC, the first AIDS organization in the world. The AIDS Coalition to Unleash Power (ACT UP), probably the best-known advocacy organization, was also born in New York in 1987. ACT UP members committed themselves to direct action against government neglect and inaction, and launched the “Silence=Death” public message campaign.

Photo: Silence = Death” poster, 1987. This image was used by activist organization ACT-UP battle against the epidemic in the late 1980s and early 1990s. Collection of New York Public Library.

As progressive as organizations like GMHC and ACT UP were, they mostly served a constituency limited by class and race. “With its origins in the white middle-class gay community,” Bayer argues, “it was inevitable that the GMHC’s largely volunteer staff would, especially in the first years of the epidemic, primarily serve such men.” There was little to compare with such activist efforts in the Black and Latinx communities.

As Puerto Rican, working-class gay men, Bennie and Crispín would likely not have seen organizations like GMHC and ACT UP as a potential resource. In the early days of the epidemic, these organizations did not actively reach out to serve communities like Bennie and Crispín’s. The massive mobilization against HIV/AIDS occurred later in New York City’s communities of color, and similarly later among its injection drug users, not picking up momentum until the mid-1980s.

Robert Vazquez-Pacheco, a Puerto Rican migrant who lived with and contracted HIV from his partner, shared his memories with Sara Schulman as a part of the ACT UP Oral History Project in 2002.

“Information [about AIDS and treatments] didn’t filter out a lot into the rest of the community. It certainly didn’t filter out into communities of color at all, because there were so few People of Color there [as members of ACT-UP], and because the perception, for example, in communities of color was AIDS was a disease of IV drug users. And nobody wanted to deal with IV drug users.”

In the opening stages of the epidemic, alongside other discoveries of how people contracted HIV, it became apparent that sharing of drug injection paraphernalia among people using heroin was a major transmitter of the virus. In July 1984, the CDC stated that avoiding injecting drug use and sharing needles “should also be effective in preventing transmission of the virus.” As early as 1984, Ronald Bayer argues, drug sellers had begun to hawk sterile needles and syringes at higher prices –indicating that people using drugs already had awareness about the dangers associated with drug injection. 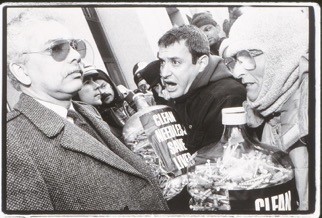 Puerto Rican activists on the Lower East Side featured prominently in the fight for needle exchange programs. Fearing that needle exchanges and condom distribution would promote drug use and sexual promiscuity, the institutional approach from city and federal government promoted abstinence. This approach was bitterly critiqued as insensitive and unrealistic.

Lower East Side activists attempted to stem the tide of heroin use in the neighborhood through a kind of local surveillance. The Lower East Side Neighborhood Association (LENA) adapted methods of working with street gangs to suppressing heroin, but with little success. They sent people out to work on the streets of the neighborhoods, finding groups and individuals. Individual work with people addicted to heroin, Schneider argues, “proved equally frustrating, if abstinence was the goal.” 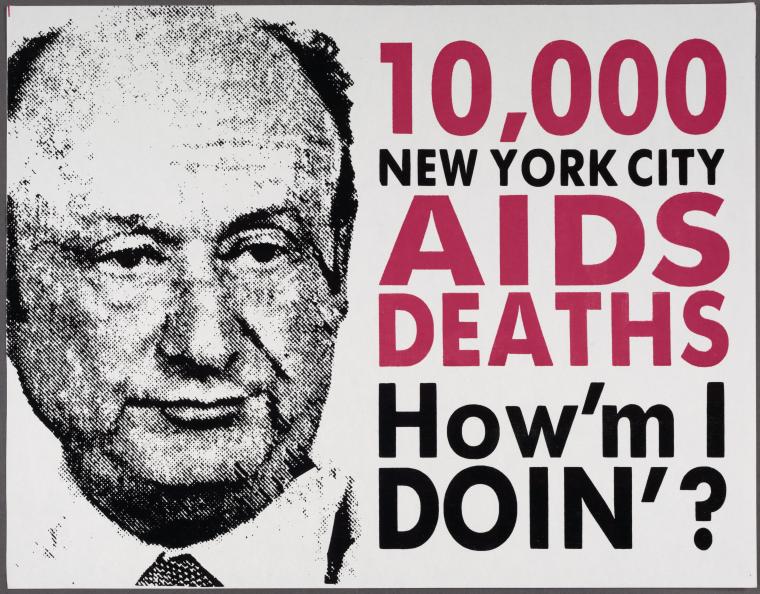 Ed Koch, Mayor of New York City from 1978-1989, oversaw the City’s response to the AIDS crisis that many people critiqued as negligent and disconnected from the reality of the virus.

Photo: Late 1980s ACT-UP New York Poster critiquing Mayor Ed Koch for his response to the AIDS crisis, which many viewed as negligent and disconnected from the reality of the virus. Collection of New York Public Library.

The Fight for Needle Exchanges

In the summer of 1985, Health Commissioner Sencer wrote to New York’s mayor, Ed Koch, urging that he radically change the laws restricting access to sterile injection equipment. “By forcing addicts to use others’ needles and syringes we are condemning large numbers of addicts to death from AIDS.”

Although cautiously supported by the New York Times and Mayor Koch, “the proposal provoked an outraged response from law enforcement officials, who viewed it as a capitulation to drug abuse, a threat to the effort to contain such behavior. Ultimately, the Mayor yielded to such opposition.” Sencer’s successor as Health Commissioner, Stephen Joseph, took over in 1986 and considered the idea further, proposing a pilot needle program. The state rejected the city’s proposal request in May 1987, and the battle for a legal needle exchange for active drug users lasted until 1992.

Just as medical science worked frantically to understand the virus, there was an almost desperate attempt to develop a treatment. To some extent, the early victims of the virus were experimented on with a range of medications. In 1982, a Person With AIDS (PWA) living in New York spoke of their experience in treatment, “Being probed and monitored…we are all white rats in one laboratory or another.”

It wasn’t until March 1987 that the U.S Food and Drug Administration (FDA) approved the first antiretroviral drug, zidovudine (AZT), as treatment for HIV.

Robert Vazquez-Pacheco described his thoughts on AZT test trials as a Puerto Rican Person of Color:

“I think that the feeling at the time was that there wasn’t a lot out there. There were very few- if I recall, the only approved drug was AZT. And I certainly wasn’t taking AZT because I know that in clinical trials, they hadn’t done any studies in People of Color. And what they found was that African-Americans were more susceptible to anemia taking AZT. Even though I’m Puerto Rican, I have black blood so I was like, “I’m not taking that drug.” I was firmly against taking any medication that I would have to take other medications to deal with. It was sort of counterintuitive to me.”

His memories reveal how government inaction and prejudice fostered mistrust among many PWA, particularly People of Color. We don’t know whether Bennie and Crispín held this mistrust, or sought treatment themselves, only that others like them experienced these barriers to care in a time of acute need.

It wasn’t until June 1995 that the FDA approved the first protease inhibitor, beginning a new era of highly active antiretroviral treatment. Once incorporated into clinical practice, these “cocktail” drugs brought about a decline of between 60% and 80% in rates of AIDS-related deaths, and allowed People with AIDS to manage their disease. Most recently, tremendous progress has been made across the globe to reduce the spread of HIV, to further research the virus, and to treat those with HIV.

Nonetheless, HIV/AIDS remains a global pandemic. Today there are 19.4 million people living with HIV in eastern and southern Africa, 6.1 million in western and central Africa, 5.1 million in Asia and the Pacific, and 2.1 million in Western and Central Europe and North America.