The Right to Vote 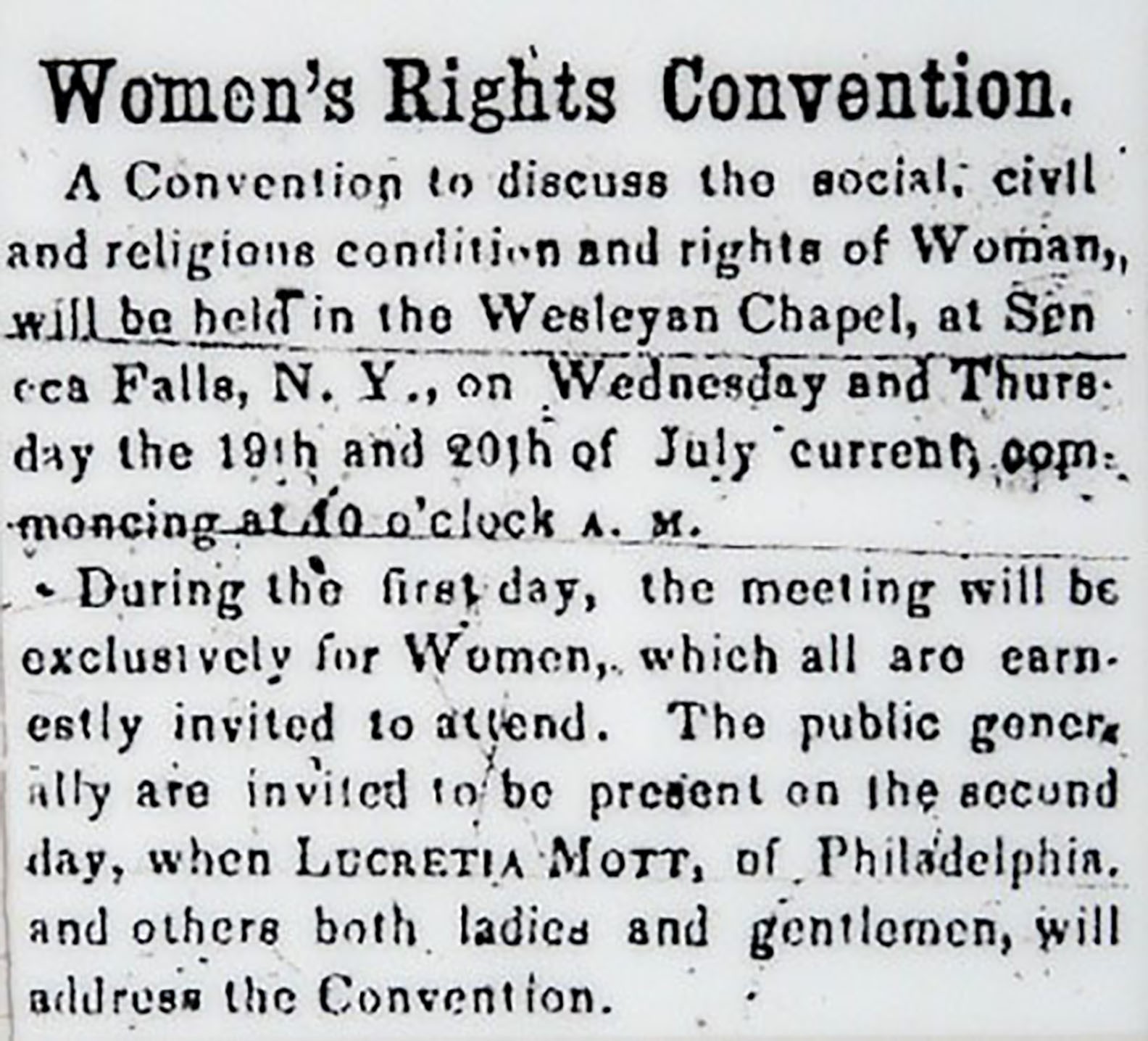 On November 6, 1917, New York State gave women the right to vote. It was one of 19 states that provided for women’s suffrage ahead of Congress’ approval of the 19th amendment in 1919, which assured that “the right of citizens of the United States to vote shall not be denied… on account of sex. “ For the women who called 97 and 103 Orchard Street home, getting the right to vote had an immediate and lasting impact.

The movement for women’s suffrage already had a long history in New York State. Legislative passage of women’s right to vote didn’t come until nearly seventy years after it was proposed in 1848, at the first Women’s Rights Convention in Seneca Falls, N.Y. In the long fight for suffrage, women in New York marshalled a variety of tactics to promote the cause, organizing conventions, parades, and marches. 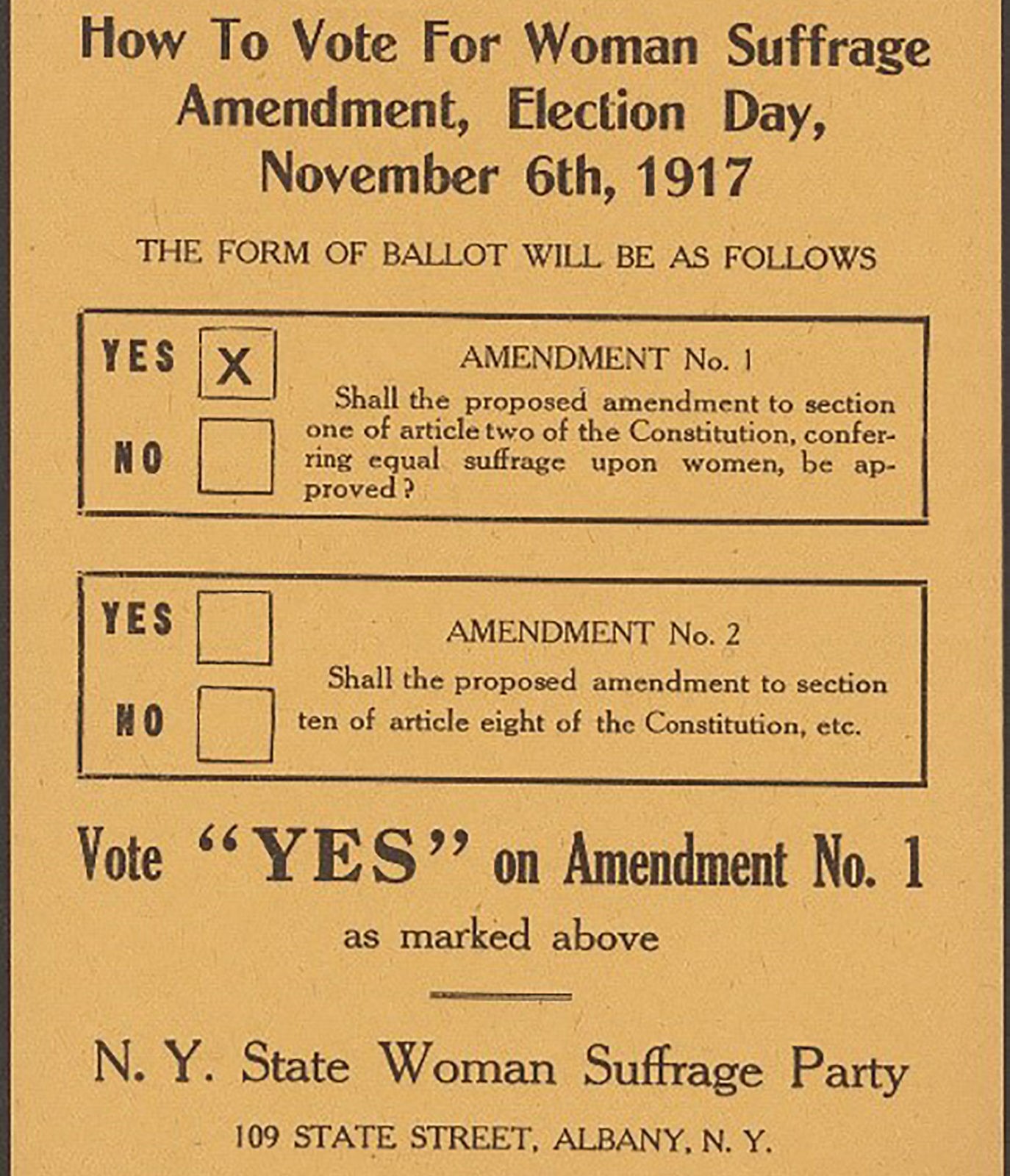 During the World War I, the visibility of the cause increased as suffrage organizations demonstrated their power and patriotism, selling Liberty Bonds and supporting the Red Cross. Tammany Hall, the Democratic Party-political machine, stopped its long tradition of opposition to the cause, increasing the number of men who might vote in support of women’s suffrage.

On Election Day in 1917, enough voters checked “yes” on the ballot for Amendment No 1. to the New York State Constitution, which read “Shall the proposed amendment to section one of article two of the Constitution, conferring equal suffrage upon women, be approved?” to make New York the first state east of the Mississippi River to enfranchise women. 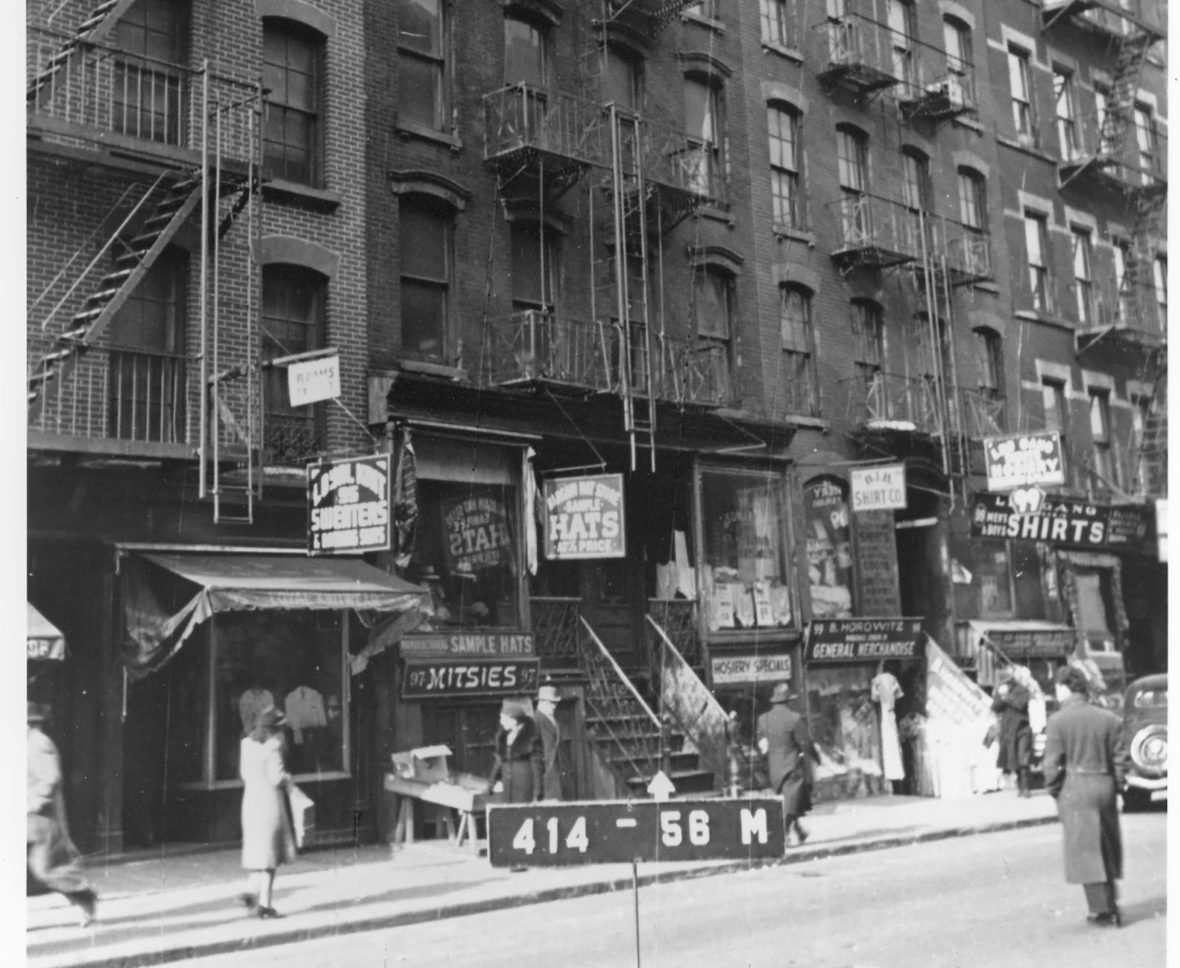 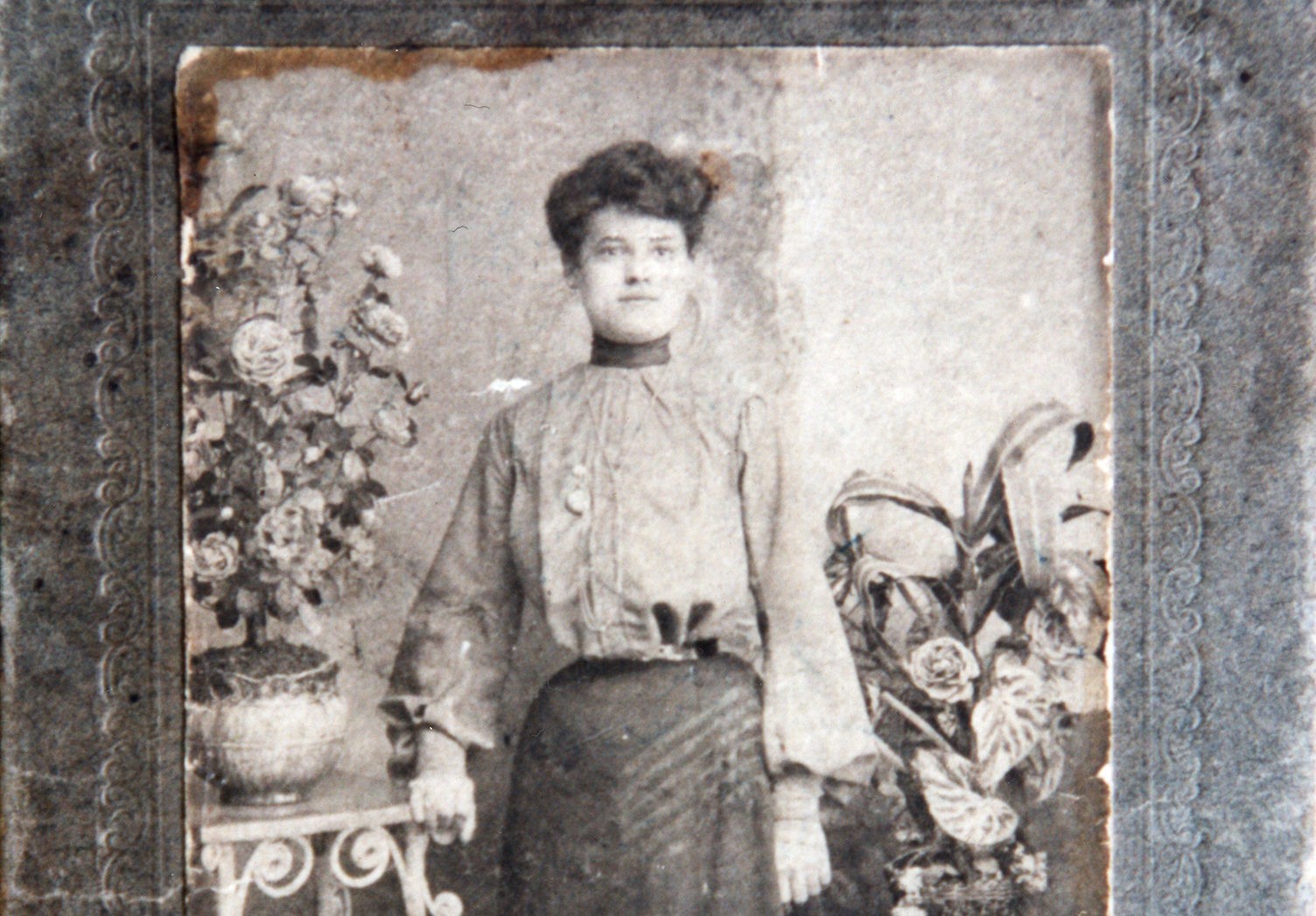 Another 97 Orchard resident, Sarah Burinescu, registered a year later. Following the death of her husband, Jacob, during the 1918 Infuenza Pandemic, Sarah, a Russian-Jewish immigrant, suddenly became her household’s primary breadwinner. Sarah supported her six children by joining the garment industry, working as a sewing machine operator. Just a year later, she registered to vote, listing her party affiliation as “socialist.” According to her granddaughters, Sarah was a member of a socialist-leaning women’s political club active on the Lower East Side during the 1910s and 1920s. 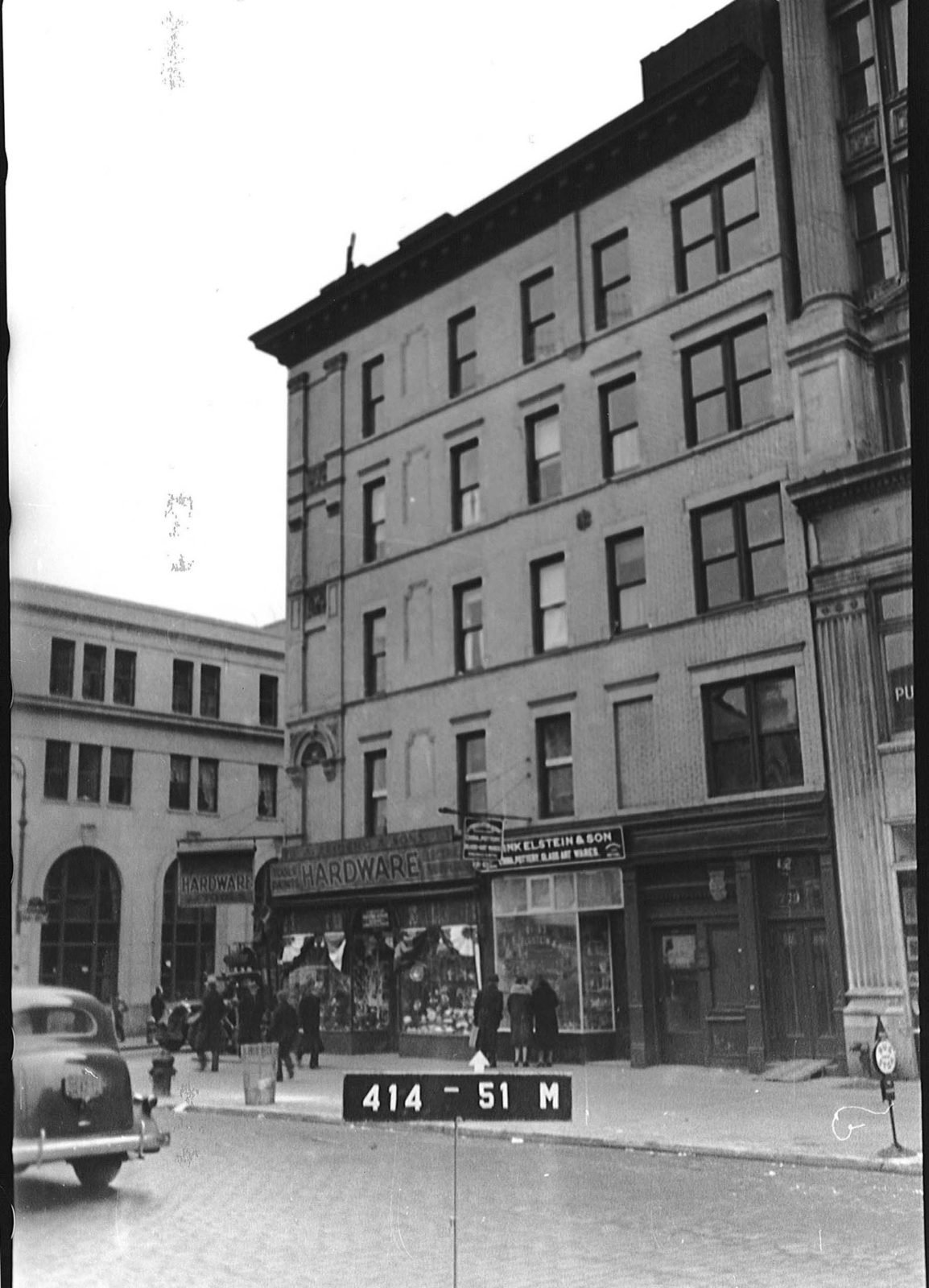 Women’s political engagement wasn’t limited to casting ballots. When 97 Orchard Street was closed to residents in 1935, Lillian Rosenthal and her husband Sam moved their family down the block to 103 Orchard Street. 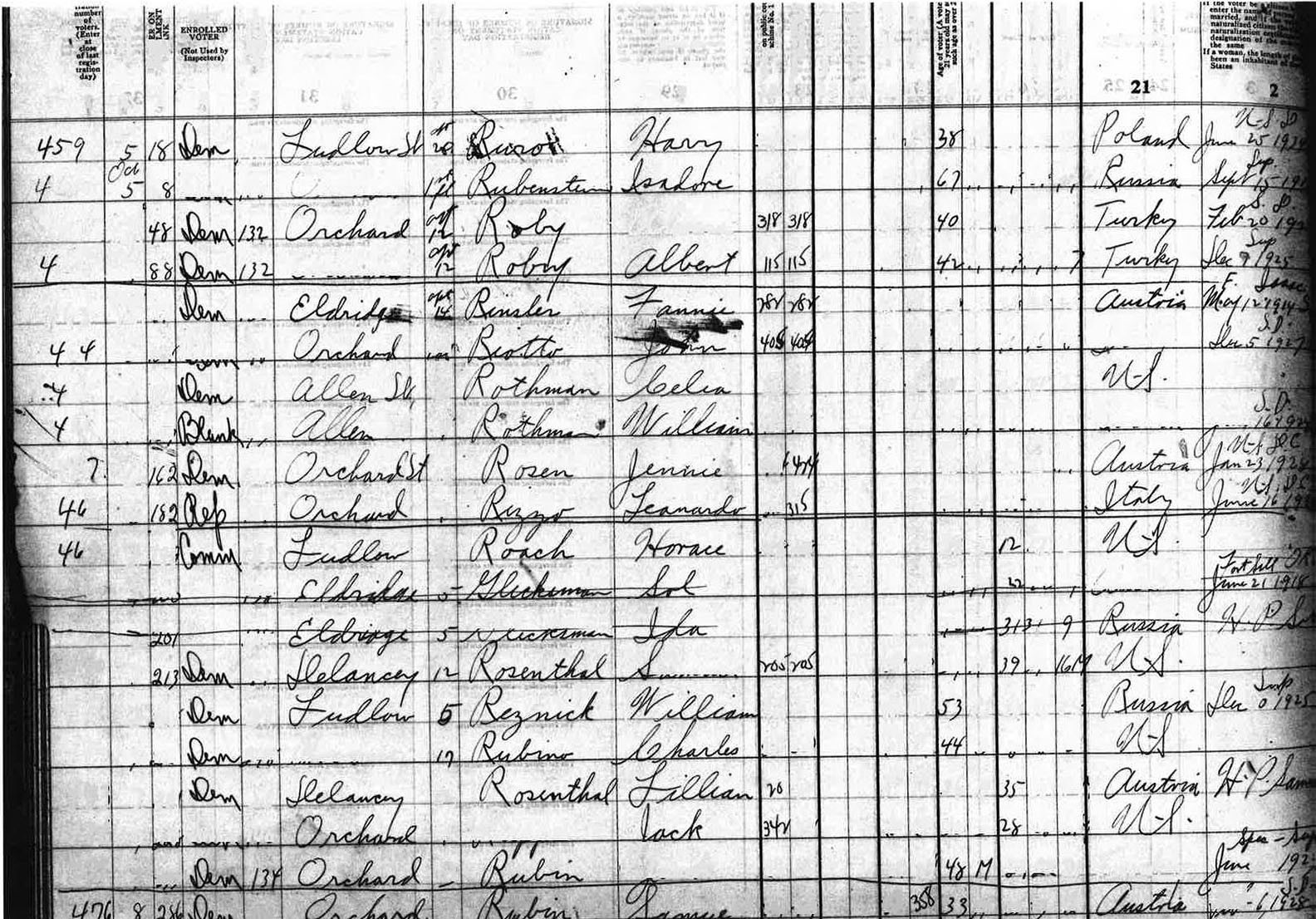 A year later, she registered to vote at this address in 1936. According to descendants, she was long involved in local politics, having worked for a judge and as a “squad leader” in the NYC Commerce Department. 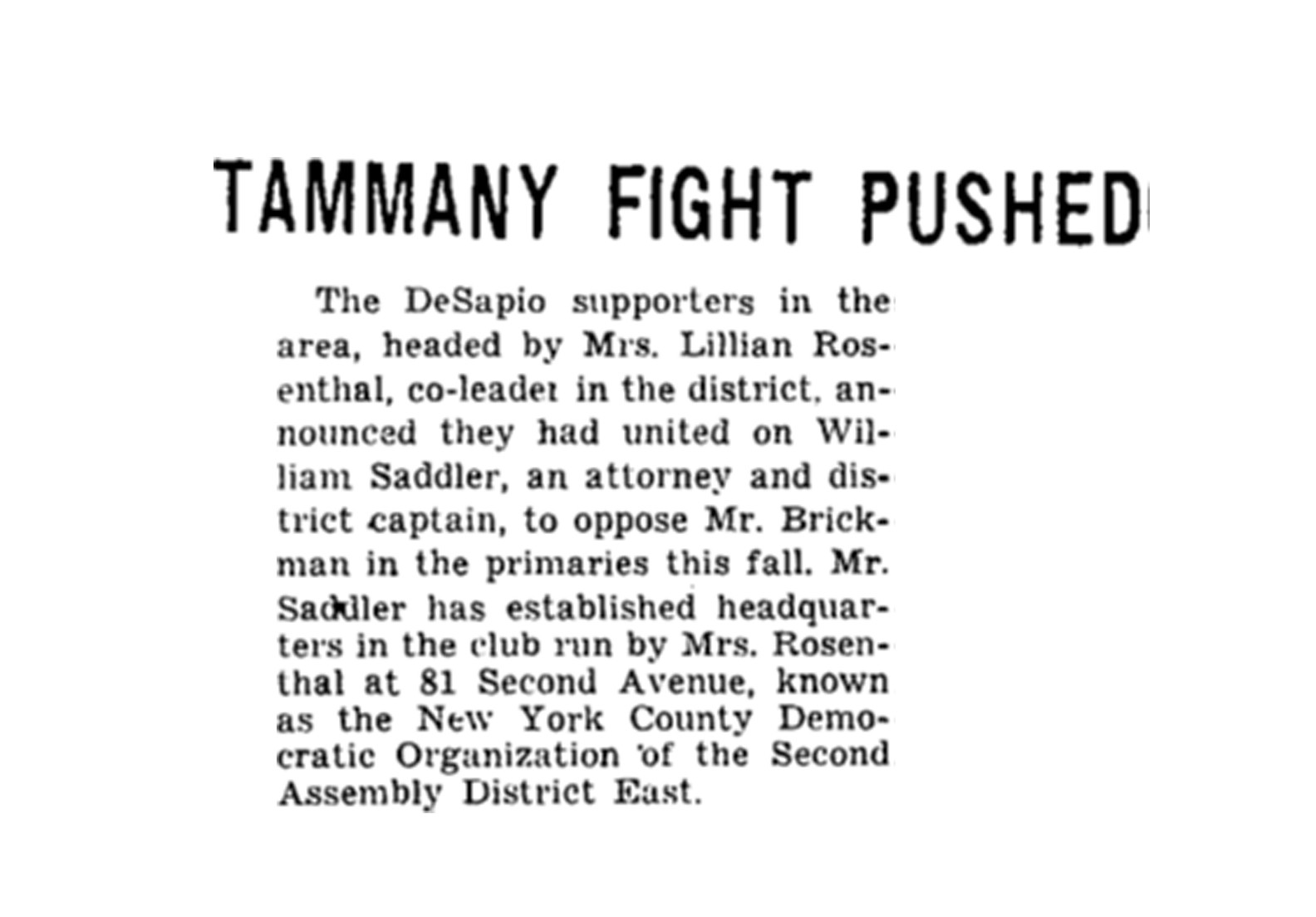 From 1946 until the early 1970s, while living at 103 Orchard Street, Lillian Rosenthal was the Tammany Hall co-district leader for the Assembly District that includes the Lower East Side, and ran the New York County Democratic Organization Club at 81 Second Avenue. Thanks to those roles, she appears to have wielded significant local political power on the Lower East Side during the mid-20th Century.

Her power, however, remained tempered by the constraints still imposed on women during the postwar decades. During this period, New York City’s Assembly Districts had a male and female district leader – that’s why Lillian was a co-district leader rather than a sole leader. For much of her tenure, this rule required her to share power with her male co-district leader, Vincent Viggiano.