Not too far from our lady of Orchard Street is another relic of a bygone era. At the corner of Essex and Broome Streets stands 75 Essex Street (left), once home to the Eastern Dispensary.

A little background on dispensaries is required, so please allow me to tell you about the Eastern Dispensary’s sister, the Northern Dispensary in Greenwich Village (right). You may know it as the place where that somewhat famous writer, Edgar Allen Poe, once stayed as a patient. Founded in 1829, the Northern Dispensary is the only building in New York City with one side on two streets – Christopher and Grove Streets – and two sides on one street – Waverly Place.

Both the Eastern and Northern Dispensaries are freestanding buildings, which are pretty rare in our fine city of party walls and few alleyways. 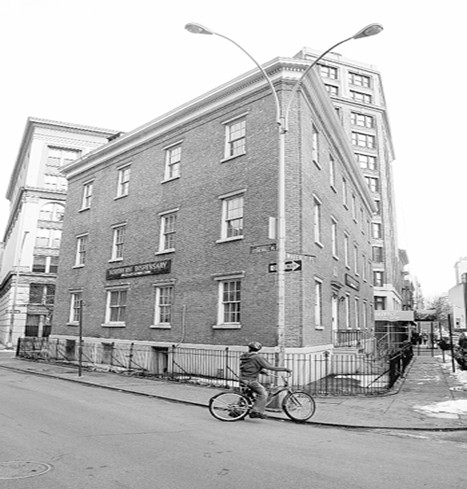 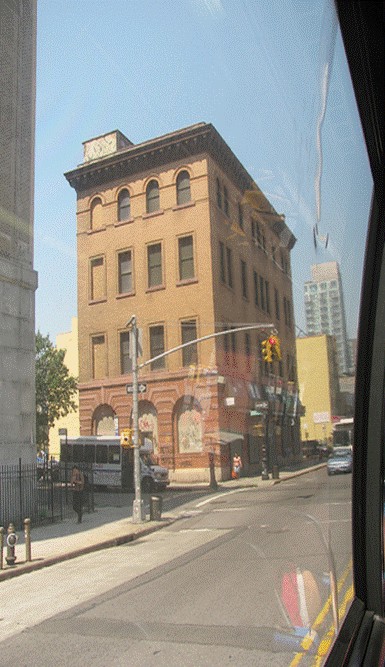 But back to the Lower East Side:

The Eastern Dispensary (also known, by the late 19th century, as the Good Samaritan Dispensary) opened in 1832 and was built to provide the sick and poor with a place to receive aide and medicine. Helen Campbell, a 19th century missionary, described its patients in her 1898 book Darkness and Light; or, Lights and Shadows of New York Life:

Weary mothers with sick and wailing babies in their arms; women with bandaged heads and men with arms in slings; children sent by sick fathers and mothers at home for needed medicine. On most is the unmistakable look that tells of patient suffering and half-starved lives. . . .

Other publications focused on promoting the Dispensary’s success in aiding New York’s impoverished:

The dispensary is open daily, and furnishes gratuitous medical and surgical aid to the destitute sick of the eastern portion of the city. It also gives special attention to vaccination, which is freely performed upon all who apply for it, without respect to their station or pecuniary circumstances. Those able to pay for this service are invited to, and it is stated, generally do contribute to the funds of the institution.

Since its opening, it has aided seven hundred and sixty-four thousand persons, at an average cost, of fifteen cents each. The number treated the past year was twenty-six thousand two hundred and eighty-six…

The institution was visited June 4th [1870], and its operations observed…. The medical staff consists of a house physician and full boards of visiting and attending physicians and surgeons, the latter serving without pay. It is a well ordered and finely managed medical charity, worthy the gifts of the benevolent and the aid it receives from the State. (The 1870 Annual Report of the Board of State Commissioners of Public Charities of the City of New York State Page 170)

Fifteen cents! Somebody get Obama on the phone. Actually, there are still many clinics around the city providing pay-as-you’re-able health care – the Community Healthcare Network‘s downtown health center on Essex has been serving the Lower East Side since 1971. It’s certainly the legacy of the 19th century dispensaries.

But the Dispensary provided more than just doctor care. Have any of you been on our Moore family tour? If so, you already know about the 19th-century contaminated milk epidemic and its fatal effects on infants. One of the city’s “milk laboratories,” which provided sanitary milk for infants, was located at 75 Essex Street. Read yesterday’s post for more on that.

The Good Samaritan Dispensary closed in 1955. The New York City Register shows that on April 25, 1977, the City foreclosed on 75 Essex Street due to unpaid taxes. Cue the Eisner Brothers!

Shalom Eisner grew up in Williamsburg and rented the first floor space of 75 Essex Street in 1977. It was there that he opened the Eisner Brothers Store. They sell everything! Here’s a blurb from their website:

Our tremendous selection includes tee shirts, sweat-shirts, golf shirts, jackets, caps and hats… [we’re] the haven for uniformed officers; they know they can count on us for all their wardrobe needs.

Professional sports buffs and amateur wannabes: you won’t find a better array of boxing equipment and licensed sports products than this.

Our collection of “I Love New York” items is beyond compare: creative, original and stimulating.

By 1985, Shalom Eisner and his family purchased the entire building. They’ve been in business for over thirty years. In this internet age, they’ve also been pretty successful with online sales.

Last year, 75 Essex Street was placed on the market for a cool $18 million. I had to know why, so I called the store and spoke with Shalom. He cited the recession as the reason why he decided to try to sell. (May I just add: People. Eisner Brothers is a neighborhood institution. GO SHOP THERE!)

While gushing over the 20 ft ceilings on every floor and the 14 ft-high ceiling in the basement, Shalom told me it’s his dream that if he sells the building “it will be left as is on the outside and become a single-family home for a famous person… Someone like Madonna. She could have her own Lower East Side home.”

He emphasized that whoever (in case Madonna isn’t interested) purchases 75 Essex Street will have to leave the outside as is (“that will be set forth in the contract”). So, not to fear, Lower East Siders and friends of preservation – while the Eastern Dispensary and its patients are long gone and Shalom and his brothers are on their way out, I can say with certainty that although Shalom believes there’s “potential for a swimming pool in the rear yard,” 75 Essex Street is going to stand strong for another 180 years.