Join us as we discover the origins of your favorite (or least favorite) holiday food traditions. This four part series will unwrap the ways these traditions have become integrated into our culture and helped shape our American identities. Read Part I: Hanukkah now. 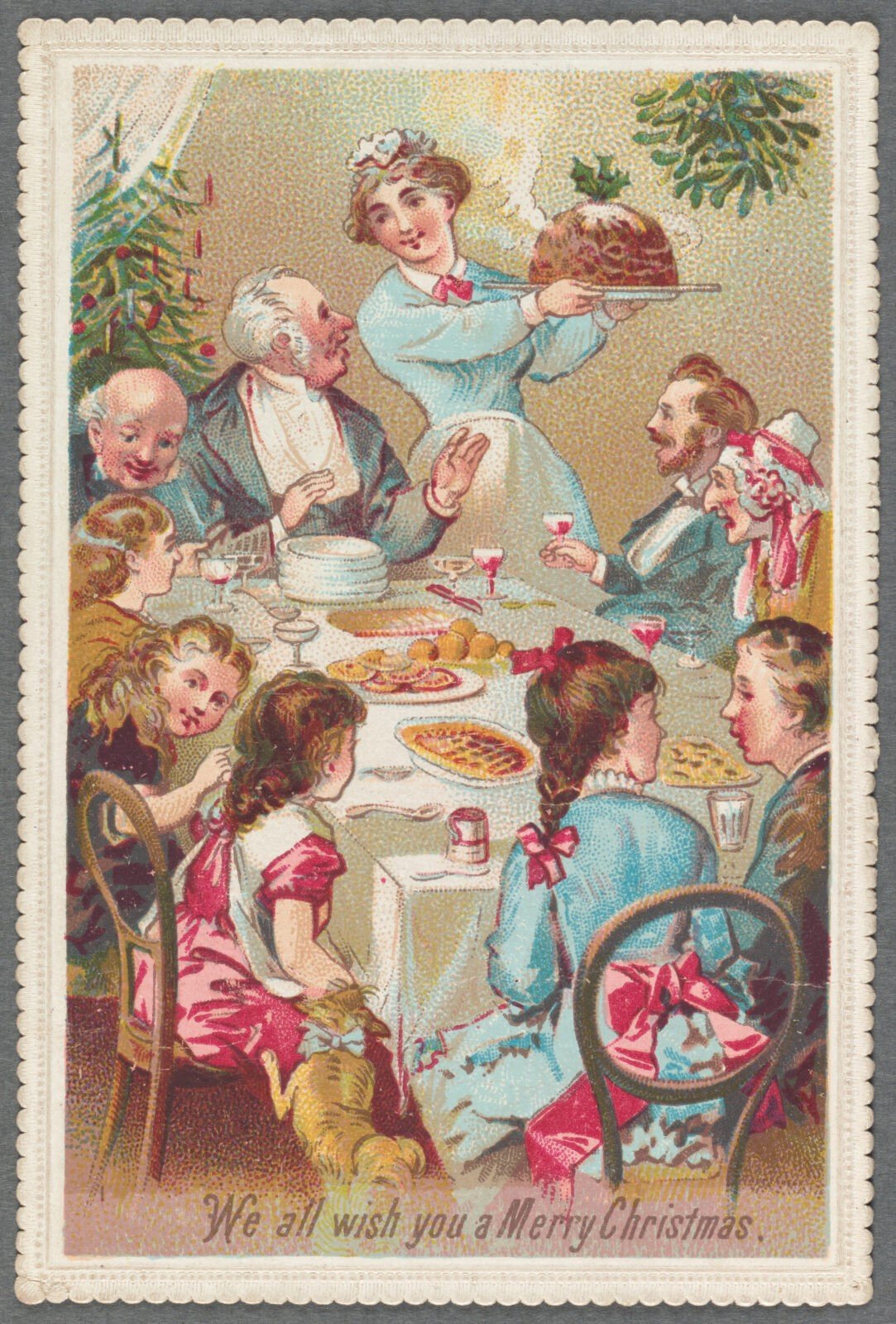 For better or worse, this Christmas will be one to remember. Though our homes may not be overstuffed with relatives from near and far, we can still turn to the comforts of food to unite us with those we love. Sweets in particular are a delicious medicine to soothe the soul. As Christmas time draws near, we find ourselves with an excuse to consume as many sugary confections as we can get our hands on. Bring on the frosted sugar cookies, frosted swiss rolls, sticky sweet cakes studded with dried fruit, and dark buttery spiced cookies cut into shapes and decorated with candy. With bellies full and hearts made warm from partaking in sweet treats, let’s dive into the origins of Christmas sweets.

We begin our culinary journey by tracing the origins of one of the most ubiquitous holiday sweets: gingerbread. Have you ever stopped to think about why we construct gingerbread houses? If you have, today is your lucky day. According to Michael Krondl, food historian and author of Sweet Invention: A History of Dessert, one theory is that gingerbread was brought to Germany after the Crusades. Gingerbread was frequently molded into various shapes that functioned as charms, as well as pressed into the likeness of various saints. Krondl attributes part of gingerbread’s holiday popularity with the belief that the spices used to make gingerbread helped to warm the winter’s chill.

Others trace gingerbread’s arrival in Europe to the arrival of an Armenian monk, Gregory of Nicopolis, who taught French bakers how to make the spiced cookie. Queen Elizabeth I is often credited with popularizing the Gingerbread Man. Her reign was famous for its elaborate dinner spreads featuring marzipan fashioned into fruit, castles, and birds. Not only this, but she could even count a royal gingerbread maker among her kitchen staff. For one banquet she had gingerbread made to resemble foreign dignitaries and members of her royal court.

Some even believe that the tradition of building gingerbread houses became popularized after the Grimm brothers published the folk story, Hansel and Gretel. While the exact origins of gingerbread are unclear, it is understood that the traditions around gingerbread today come from Germany, France, the Netherlands, and the British Isles.

Early German immigrants brought their love of gingerbread houses with them to America, and since then we’ve been constructing the candy-coated houses for over 200 years. George Washington’s mother even had her own recipe for gingerbread which called for shaping the cookies into miniature kings, pre-revolution, and into eagles, post-independence. Very patriotic! 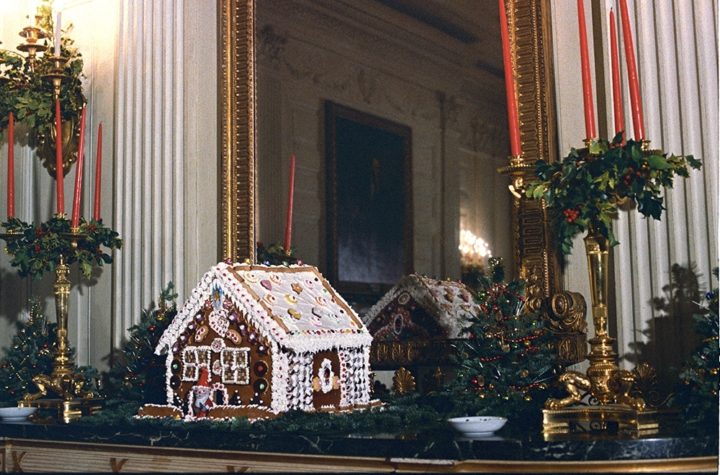 One might argue gingerbread has become the poster child of Christmas cookies. No Christmas display is complete without a gingerbread house or gingerbread man. It has been so assimilated into American culture that its European origins are little known.

The next holiday treat is a little more controversial. It is frequently gifted, but less frequently consumed. It is one of those foods that you either love or hate. In English slang, it is used to describe the eccentric or the insane. Any guesses? If you guessed fruitcake, you are correct. 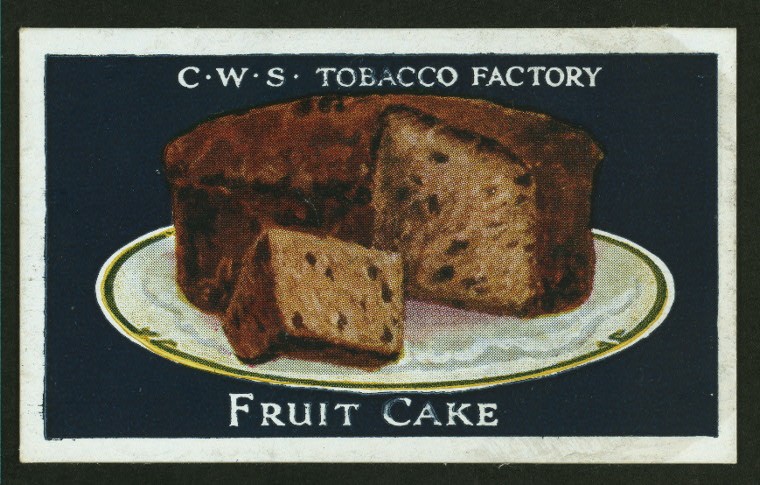 Fruitcakes, like gingerbread, come with the territory of Christmas. Its origins go as far back as the Middle Ages, when dried fruits became more widely available. The cost of ingredients was so high that in the 17th and 18th-century fruitcakes were only made for special occasions, such as weddings and holidays, particularly in Victorian England. Fruitcake recipes came over with English colonists. It is believed that America’s partaking of fruitcakes with Christmas was inspired by the British, who sometimes called their fruitcakes “Christmas pudding.” But while fruitcakes are still beloved in many European countries, in America, a slice of fruit cake is the last thing anyone wants on their plate.

Fruitcake aversion is woven into the very fabric of our country. According to a 1985 New York Times article, one family had been passing down a fruit cake for over 30 years. The cake was said to have been initially baked in 1794 as a Christmas gift for George Washington. Washington sent the offending cake back with a note that said it was, “unseemly for Presidents to accept gifts weighing more than 80 pounds, even though they were only eight inches in diameter.”

Our disgust for this cake often makes it the butt of jokes. Of this dense fruit studded cake, Johnny Carson once said, “There is only one fruitcake in the entire world and people keep passing it around.” Hating fruitcake seems so expected that it’s become a part of our cultural collective identities. But if we hate it so much, then why does it continue to be purchased and gifted? 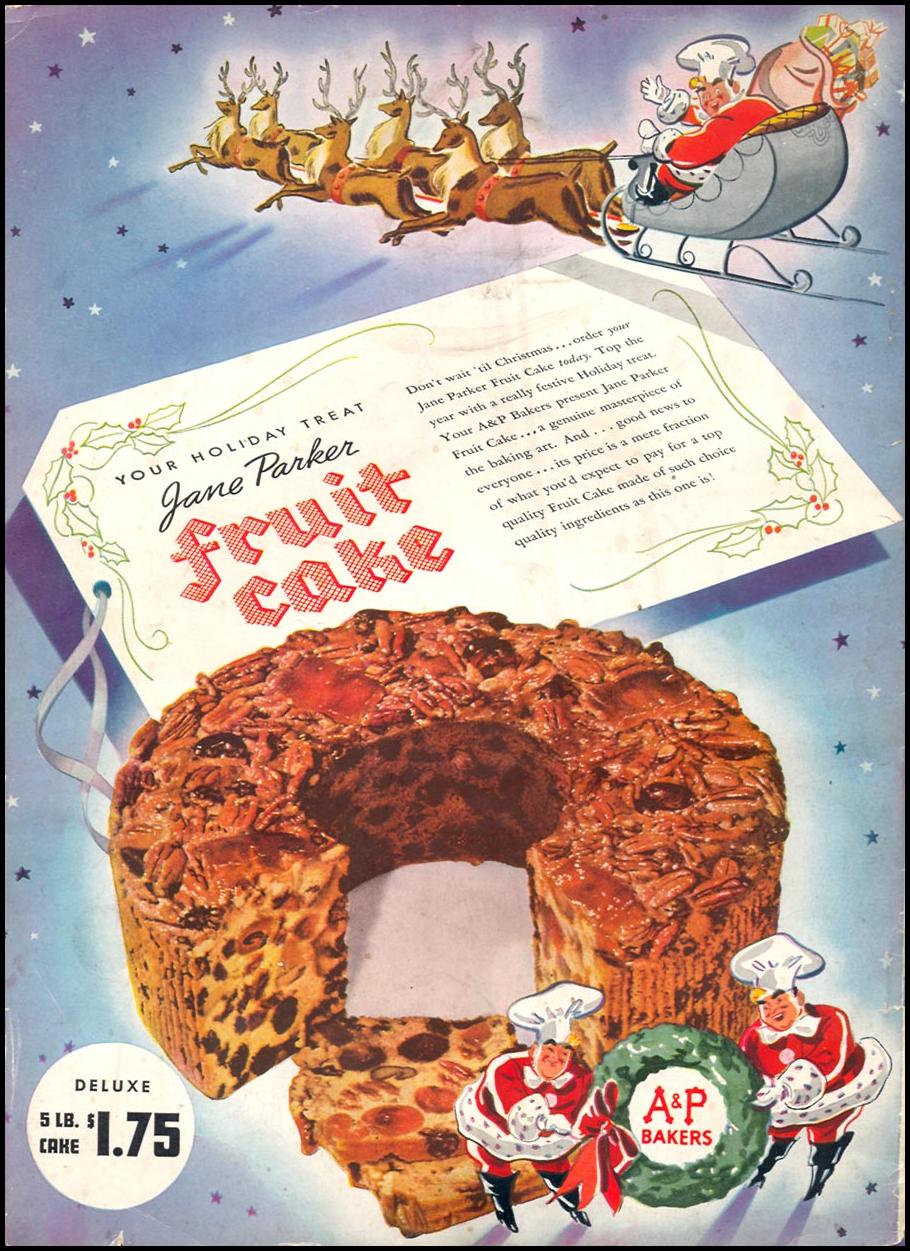 One theory is that the cakes fell out of favor in the early 20th century when mass-produced mail to order fruitcakes became prevalent. Amy Bentley, food historian and professor at NYU, believes that the distaste for fruitcake was a result of changing taste preferences. “The American taste profile — our palate — for much of the 20th century was centered around sugar, fat, and salt,” Bentley said. “In terms of cake — the kind of ‘Betty Crocker’ style dominated the last century. It was very light, very sweet, and really, the antithesis of fruitcake. Fruitcake is just a taste that fell out of habit and became a dessert associated with the old and out of touch. And as a result, ended up a punchline for jokes around Christmas time.”

Perhaps fruitcake’s strong association with Christmas coupled with its image of old fashioned tastes and values are what is keeping the fruitcake tradition alive despite its poor reputation.

As with many foods, gingerbread and fruitcake are foodstuffs that came to us from abroad and today play such an integral part of our holiday culture that we no longer question their origins. It is a testament to what makes America so unique, that disparate people can come together and create a diverse food culture of their own that then become emblematic of our festive celebrations. Our holiday bashes may not exactly resemble those of the past, but we can always count on gingerbread and fruit cake to grace our tables.